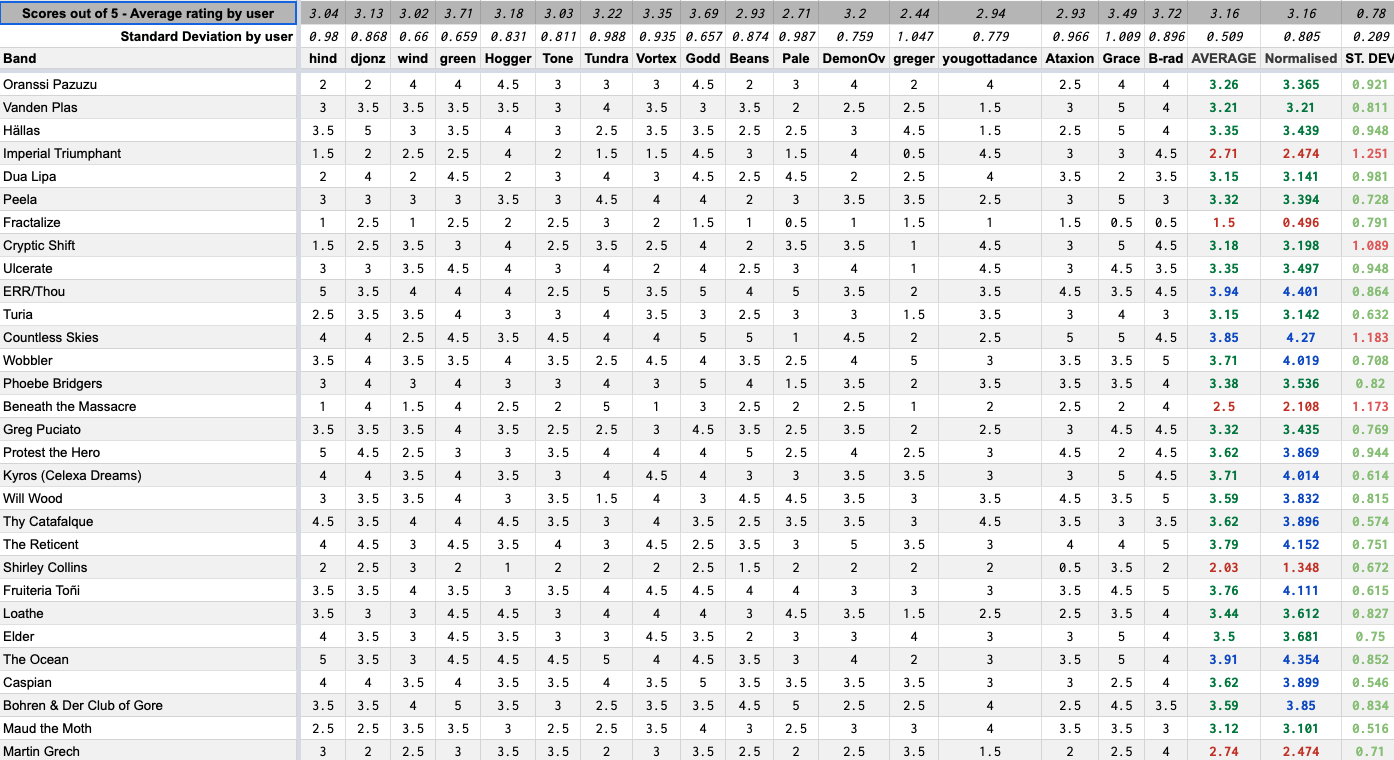 Just a handful of the ratings on the ‘True Taste’ spreadsheet

Some of the members of the Images & Words Discord server came together to rank a large number of albums that were released throughout 2020. It involved dozens of communal listening parties (LPs) to get through all of the records released.

I also joined in with a handful of the parties, and went through to listen to all 99 of the albums on the list to give my two cents. As you know here on Proghurst, we generally aren’t huge fans of giving albums a number ranking. But going through the process with a bunch of friends to average out some of those numbers might remove some of the bias that comes with those number rankings, so I thought I’d give it a shot, and see what the results end up being.

I decided to catch up with the people behind the spreadsheet to get a look into the maths, and also find out what results from this exercise has produced. For some context…

Grace: Who came up with the idea?

Hind: Initially the idea was mine and Djonz’, we both wanted to listen to every album on the I&W 2020 AOTY list (for fun and masochism) so we set out to LP one album a day together for however long it was going to take. Ratings were pretty much an afterthought at the time and mostly just a joke. Wind hopped in right at the beginning, and the project kept growing from there. I didn’t think we needed a spreadsheet at first, but Wind made one and now we’re a cult. So you can blame him for this monster we’ve created.

Grace: Talk to me about maths. What’s happening behind the scenes to get the most representative ratings possible?

Wind: Initially when it was only 6 of us our averages and standard deviations were largely comparable (apart from green), but as we added more people I noticed that there were large differences between users, and thought of adding some degree of parity between albums. The idea is to differentiate between a 3 from a person whose average is close to 4/5 and a person whose average is 2.5/5 – since they should not hold the same weight IMHO.

I standardize each rating – basically, it calculates how many standard deviations away from the mean each individual rating is. After that, I find the average of these standardized ratings – which thus takes into account both the difference in averages and difference in the distribution of ratings – and fit the standard average onto the distribution of the numerical averages.

This method is not perfect, the best way would be to do some sort of curve-fitting but for our purposes, I feel it more than suffices

Grace: How many participants were there, and why should we take their ratings as gospel?

Grace: Why go to all this effort when you could rate the albums on a service like rateyourmusic.com which has a larger sample size?

Tone: I think the small group factor + the LP events happening allowed us to form some bonds and friendship, which also allow us to poke fun at each others’ ratings. We don’t take ourselves seriously and it’s just for fun. Also, we’re all on this server because we have affinities with prog, so the ratings have more significance for other prog fans than aggregate ratings websites where people with a lot of different taste rate albums of all genres.

Grace: Did you enjoy listening through to all 99 albums?

Wind: No, some albums were so not my taste that my RYM average in the 2020s dropped. It is, however, fun to LP these albums, since the banter is fun.

Hind: No absolutely not. But I would’ve enjoyed some of them even less if I weren’t listening with friends.

Grace: What conclusions have you been able to draw?

Wind: The server’s taste is very prog – albums that I personally find unmemorable/lacking in dynamics, harmonies have been well-loved. I’ve noticed prog fans generally don’t mind those as much as I do, and are willing to sacrifice these for other song elements and this experience definitely reaffirms my opinion. Avant doesn’t find much love, but I’d personally say that the avant picked on the sheet tended to all have significant foibles that could be overlooked by individuals, but not a collective.

Hind: Bands should really avoid making long albums that exceed 70 minutes. They’re a chore for almost everyone regardless of how enjoyable people find the music.

Grace: What are the group favourites?

Tone: Vulkan was the clear favorite, albeit the consensus of it being slightly too long

Hind: The top spots of our ranked list were taken by prog-rock albums, along with a mix of some heavier metal albums – atmospheric sludge and prog death. Kalandra was some art-rock/pop nobody had heard of but became a favorite, one of the reasons this is fun to do.

Grace: What are the lesser loved albums?

Hind: Our group turned out to be biased against the more abrasive genres of metal, albums that fell within the realm of avant-garde metal, tech death, deathcore, etc tended to be rated somewhat negatively, since they were simply not to our tastes. Other albums that got rated negatively were simply out of place among a largely prog metal-listening audience.

Grace: What album do you think should have gotten a higher rating?

Hind: The Nero di Marte album did not get enough love.

Wind: Jessie Ware’s Album is fun synthpop, don’t see why it should be 3.

Grace: Are there any hidden gems that prog enjoyers should be more aware of?

Tone: My biggest discovery has been Lucid Planet, it even led Vortex, green, Tundra and myself to discog run LP the entire Infected Mushroom afterwards. Pure Reason Revolution also had unanimity on how gorgeous it sounded. Fruiteria Toni was also a nice undercover gem. I’m also glad most people liked Klo Pelgag, as it’s probably my favorite lushy-pop artist nowadays.

Hind: The Fruiteria Toñi album felt like the most ‘hidden gem’ discovery on the list. My personal favorite discoveries were Döda Havet, Pure Reason Revolution, Novena, and Thy Catafalque – all of which ended up highly ranked.

Grace: Are you going to be doing this again once 2021 is over?

Tone: Of course, we’re already doing the 2019 one right now and planning to do the 2018 one and possibly the Album of the decade one too.

Hind: If we are all alive and not absolutely sick of listening to albums we know we know going to enjoy, then yes definitely. In the meantime, we’re going through 2019 now and possibly going back further in time after that.

So after all that the top albums of 2020, according to the spreadsheet, were…