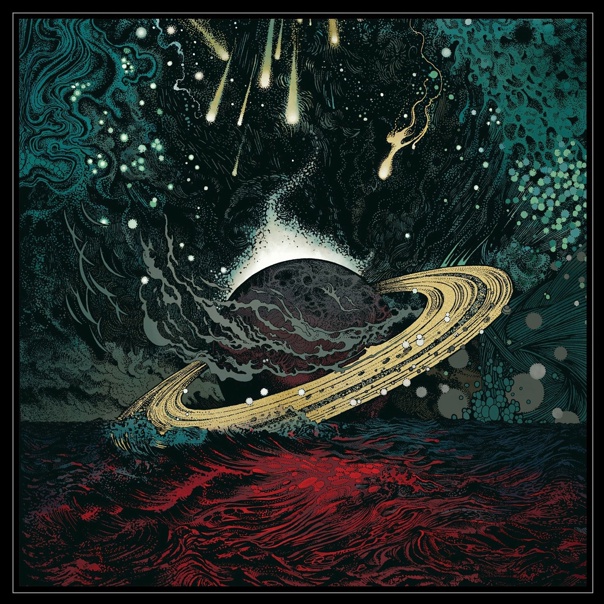 The cover art for ‘Heavy Pendulum’

Cave In’s 2019 album is called ‘Final Transmission.’ Caleb Scofield, the band’s lead vocalist and bassist, passed away in 2018 in a car accident, and the band were prepared to call it quits. ‘Final Transmission’ was an apt title. They began to wrap up by playing a few benefit shows for Scofield’s family and asked longtime friend Nate Newton (of metalcore band Converge) to fill Scofield’s void for the performances. He meshed so well with the band that they decided to keep going. Newton provided bass, lead, and rhythm guitar; Stephen Brodsky shared bass and lead guitar duties and took over all vocals, which he had previously shared with Scofield. With Cave In’s steadfast drummer, John-Robert Conners, and rhythm guitarist Adam McGrath, the four headed back into the studio to record their 2022 rebirth, ‘Heavy Pendulum.’

And is it heavy. Out of the gate charges a metalcore riff underneath howled vocals. ‘New Reality’ echoes lyrics about the Old Man of the Mountain, a natural stone fixture in the shape of a man’s profiled face in the White Mountains of New Hampshire. Scofield called the state of New Hampshire home, so Cave In honour his memory with lyrics comparing his tragic passing in 2019 with the collapse of the Old Man’s face in 2003: “Granite state of shock / See the fallen rock / Slip off the mountain / Face of man within: new reality… mourning the sun”.

‘Blood Spiller’ continues the riffage, and in fact this whole album is a masterclass in creating fantastic riffs and motifs. Cave In have nearly thirty years of experience writing in genres from metalcore to alt-rock to progressive metal, and it shows on this album. Cave In’s diverse riffs suggest influences as diverse as Deep Purple, Tool, and “off-the-grid jazz-fusion,” in Brodsky’s words.

‘Blinded by a Blaze’ is the first feature-length track, at 7 minutes and 39 seconds. “The blaze is the sun; the blindness comes from driving along the Pacific Coast at golden hour next to someone you love”. The lyrics are nostalgic and the music is in a minor key. As a result, this coast, in my mind, is not warm seashore, but cool redwood forests dwarfing the car below the trees.

One of my favorite songs on the album came from a dream Brodsky had about Tool’s 2019 album ‘Fear Inoculum.’ ‘Nightmare Eyes’ is another long-distance drive, clocking in at 7:05. It’s a slow-burning track with tempo changes, clean and dirty vocals, and fun lyrics – everything I love in a longer song.

Cave In know an hour-and-ten-minute runtime makes for a lengthy album. They also know how to alleviate any fatigue that may develop: besides monster riff after monster riff, the vocals are melodic, which allows the listener to pay attention to lyrics about everything from the political atmosphere of the United States in 2020 (‘Blood Spiller’) to helium balloons (‘Floating Skulls’). Appropriately named ambient tracks like ‘Pendulambient’ and ‘Days of Nothing’ give some time to breathe before Cave In return for the album’s encore.

George Harrison may have written the best love song to a wah pedal, but Cave In’s opening riff on ‘Waiting for Love’ certainly gives it a run for its money. The bridge-cable bass tethers the flighty vocals to the ground for the album’s most emotionally vulnerable song. The band needs some grounding too because the final two songs, ‘Reckoning’ and ‘Wavering Angel,’ deal once more with loss and moving on. The former is the first song on ‘Heavy Pendulum’ to start with an acoustic guitar, and it is the lightest song on the album – interludes aside. ‘Wavering Angel’ is the sledgehammer that drives the whole project home: “What happened to us, my friend? Floating, floating untethered / Light as, light as a feather / Heavy, heavy wet weather.” It’s the requisite prog metal ten-plus minute track. Once more, Cave In prove they can maneuver around short-term attention spans. Not once does ‘Wavering Angel’ become stale: Cave In pull out all the stops: an acoustic opening into heavy riffing, tempo changes, metal chugs, and unclean vocals. It’s a beautiful closing track.

If you like metal – and if you don’t, thanks for reading this far – ‘Heavy Pendulum’ is worth the time investment. If you prefer lighter stuff, consider giving ‘Reckoning’ a spin. Or, if that’s still a little heavy, take a glance at Richey Beckett’s album art before you leave. It’s gorgeous, and perfectly represents the sound of the album. This new reality Cave In face without longtime bassist Caleb Scofield is undoubtedly difficult, so I am grateful to the band for continuing and giving us ‘Heavy Pendulum,’ one of my top albums of 2022.