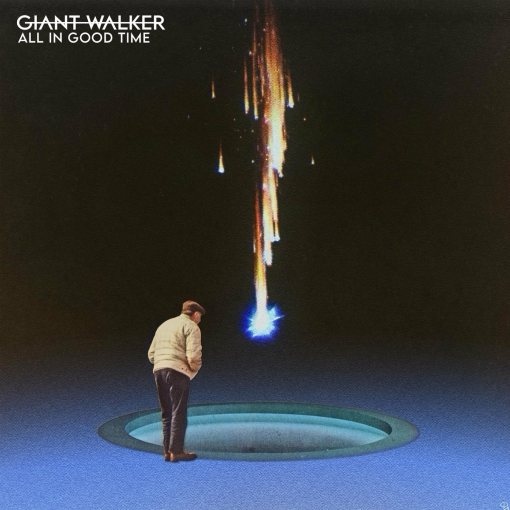 The album cover for ‘All in Good Time’

Back in 2021, out of the blue, I found a single released by a band I had never heard of, so my curiosity led me to listen to that song and it turned out to be their first-ever single. I was blown away as soon as I heard it. The band is Giant Walker – they’re a female-fronted, progressive metal band from the UK, and they have just released their debut album ‘All in Good Time’ in May of 2022. This was my most anticipated album of the year solely because of how hard that first single hit (and all the following ones too).

The first single that was released, ‘The Fact in Fiction’, is also the album opener – and it works well where it is. The song starts off with an eerie fading sound that bursts into this rhythmic riff that is very headbang-able and that feels like it’s in odd-time (but actually isn’t) and it’s just so fun. Cue the vocals, and they come in with a bang, Steff Fish’s voice is both serene and packs a punch.

The whole album has a great flow to it, and with a run-time of 40 minutes the replayability is high, the production is incredible and sounds so crisp, like everything is where it should be in the mix. All incredibly impressive for a debut.

The songwriting is impeccable, ranging from face-melting riffs written by guitar player and composer Jamie Southern, to perfectly fitting floaty sections that work well as tension resolutions. Steff has fantastic control over her voice, she can go from enchanting, soft vocals, to a truly gritty and powerful voice that just adds so much depth to the music.

After three high-energy tracks, things tone down a bit for ‘Inertia’ where it starts with a drum and bass groove, played by Jordan Gregory and Alex Black, while the guitar plays some ominous arpeggios that really set the mood for the song, dark and melodic, while keeping the same floaty textures.

The fifth track ‘Optophobia’, was the second single to be released. It starts off with a melodically rhythmic riff accompanied by heavy drums and bass. Then the vocals come in and they are as haunting as they are beautiful. Come the chorus, and it is another catchy one, and that applies to the whole album, there are plenty of good catchy choruses to sing along to (or at least try to…).

Now it’s time to unwind again with another “calm” song ‘Past the Peak’, it’s funny that this song is called that because of its placement in the album, clever. Now I say this song is calm but that’s deceiving because after three minutes of soothing melodies, atmospheric guitar, groovy drumming, and some tasty bass playing, the song goes into the heaviest section of the album. The instrumentals go crazy and Steff does some impressive high distortion vocals.

The album closer ‘Coda’ begins with a nice drum groove and then goes into the song’s main chord progression which sounds delightful. After a few minutes of riffs and some of the best vocal melodies on the album, everything dies out and piano starts playing until the end and it’s such a nice way to end this album. Now to loop it back.

As a whole, ‘All in Good’ Time sounds extremely polished and is just a treat to listen to. I’d say this is a must-listen for Karnivool fans and fans of awesome music in general. I just can’t get enough of it and I find it taking my brain hostage a lot, I’m always singing something from it. The band did a really good job on their debut (and I’m already looking forward to more). My favourite tracks were ‘Podha’, ‘Optophobia’, ‘Past the Peak’.