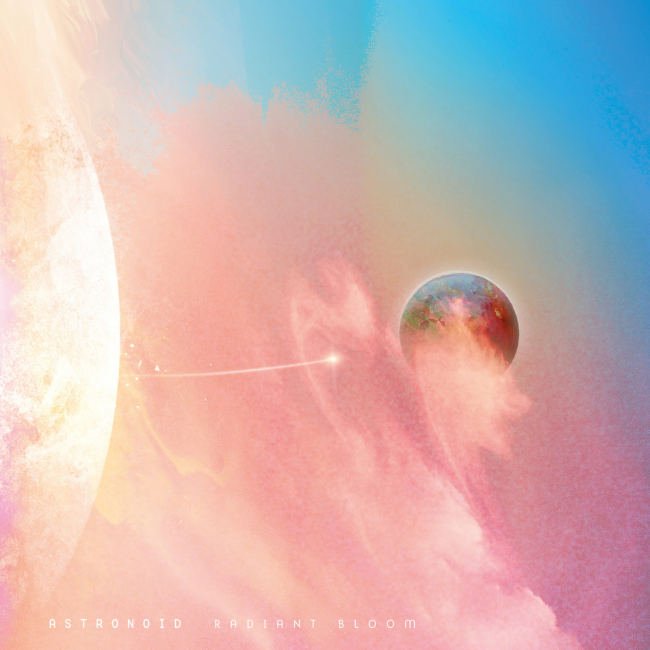 The album cover for ‘Radiant Bloom’

Astronoid are a US-based Post-Metal band, formed in 2012. After an extensive period of touring with credible artists as openers (Devin Townsend, TesseracT, Between the Buried and Me – to name a few), they have just released their third studio album, ‘Radiant Bloom’, which largely continues to follow the path the band has laid out for themselves over their discography.

It’s a bit difficult to put these guys into a specific drawer as they take a lot of elements from Black Metal and Shoegaze, which one might assume puts them into the Blackgaze category. While technically not too wrong, the key difference is that Astronoid doesn’t utilize any screamed or shouted vocals. Quite the opposite, in fact: one of the signatures of their sound is heavily reverbed falsetto vocals provided by founding member Brett Boland – a style that is often compared to that of the band Mew.

As a result, listening to any of their records will most certainly evoke a sense of dreaminess, like having the soundtrack to a space odyssey collide with Black Metal. This undoubtedly will mean that a reasonable amount of listeners will feel irritated, being confronted with two vastly different moods of music at once.

However, I love these guys and was eagerly awaiting what they had in store next. My expectations were high, and to spoil as much, I was not disappointed in the slightest!

Like their predecessors, ‘Radiant Bloom’ sports a sizable nine tracks, giving enough space to invite the listener to take this journey with the band through a lot of variety without feeling too confused.

The album kicks off with a sinister synthesizer of the first track ‘Admin’. At least at first, as it doesn’t take too long to realize that this synth is used as the backbone for the main riff to take the lead. It’s here that one of the most significant tropes by Astronoid becomes apparent: their songs are pretty much exclusively written in major, heavily adding to the dreamy, optimistic atmosphere. The track itself serves as a small sneak peek of what’s in store next,  moving forward at a slow but steady pace.

Things start to become a bit more tense starting with the next track ‘Eyes’, the album’s lead single. Still dreamy, but with the first blast beats, double bass drums, and also the first guitar solo coming into the picture.

‘Sleep Whisper’ had me double-check whether I was listening to Gojira or not, because the opening riff reminded me a lot of their song ‘Amazonia’. Apart from that, it largely follows the same idea of the previous track, although at a more laid-back pace.

My personal highlight of the album and also a big surprise was the fourth track, ‘Sedative’. This is probably my new go-to track for getting more people into this band, as it has just about everything you’d expect. It’s fast, hard-hitting, and all the while still incredibly optimistic and – for lack of better word – happy. This is perhaps the heaviest onslaught of positive energy you can find.

From here on out, the album mostly continues to walk its own beaten path. This is also where any criticism might be applied, as Astronoid stay true to their sound and ensure that you’ll get a sense of serene escapism for a little over 40 minutes when you put on any of their records without much diversion. But, while this might be a turn-off for people looking for a more varied experience, to me this is not a con in any way. There are no moments of sudden gloom or despair – and while the pace and tempo change frequently, the overall direction is very obviously always meant to be going forward.

The only track I want to draw special attention to one more time is the closing track: the seven-minutes-long ‘Decades’. This slow-paced farewell song sounds like it would be played over the closing minutes of a film when all character conflicts have been resolved, and we now see small vignettes of those people in their new daily lives. It’s honestly a beautiful closure to this trip, itself ending with one of the most beautiful jams of the entire record – nobody should go home feeling anything but rejuvenated.

If you are already familiar with this band, ‘Radiant Bloom’ is a no-brainer recommendation. For anyone who has heard about Astronoid for the first time and is willing to experience something new, I strongly recommend you to check out these guys!