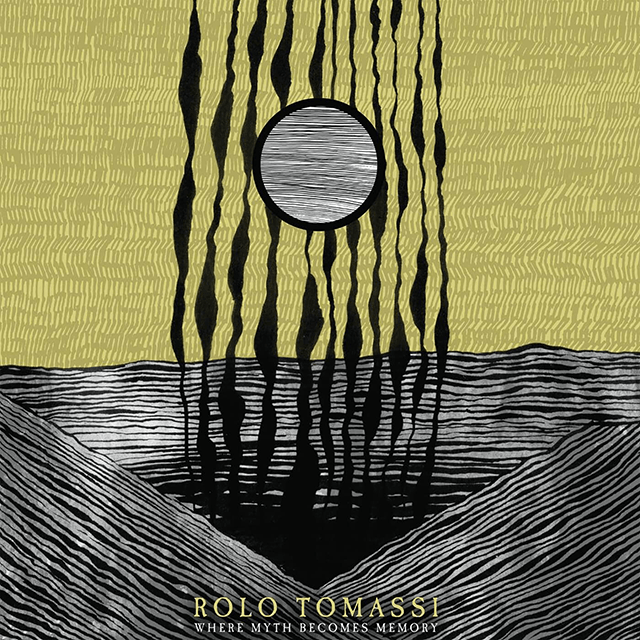 The album cover for ‘Where Myth Becomes Memory’

Whilst I only jumped onto the Rolo Tomassi bandwagon at their previous album ‘Time Will Die And Love Will Bury It’, I’ve caught two of their live shows and been absolutely blown away. Every time I’ve gone back to that album, I became more and more infatuated by the band’s approach to songwriting, harmonies, and soul-crushing riffs – but in particular, the vocals of one Eva Korman because holy moly, does she have some pipes.

I’ve genuinely spent a lot of time trying to get my head around how she does it – because it’s bloody impressive. The contrast between her harshes and cleans makes for an incredibly satisfying juxtaposition in the band’s music, and it’s what initially drew me into their sound. Luckily for us, there’re more of these fantastic moments in ‘Where Myth Becomes Memory’ with the return of angelic versus hellish contrasts buried tastefully throughout the record.

As the album starts with ‘Almost Always’, Eva’s vocals float on top of an abrasive wall of noise created by the instrumentals beneath. And as the track builds and builds into a post-rock extravaganza, the drums take us for a slow and gradual ride to a soft climax – as to not overwhelm the listener so early on in the record.

And then we have ‘Cloaked’ which is so heavy it runs you over like an SUV on an American highway. The opening guitar riff played by Chris Cayford is insanely heavy, paired with fantastic sound design from James Spence. I adore the synth patch backing the guitar as it reminds me of some of the soundscape patterns used in HBO’s Chernobyl which I fell absolutely in love with, just like this song. The eerie pads combined with chunky guitar lines make the band sound massive – and it’s no wonder they used it as their lead single. My only complaint is that it should have been longer – but hey, that’s the prog head in me.

Eva sounds absolutely insane on ‘Mutual Ruin’. Her harsh vocals are just.. petrifying, and beautiful. I really can’t emphasise how much I love them! And then we’re paired up with heavy drum grooves throughout from Al Pott that takes this track to the next level when it comes to some headbanging goodness.

Getting on into the middle of the album, ‘Closer’ give us a nice sonic break from the unrelenting riffs and harsh vocals with the softer and gentler sounds that the band are known for. And I know I’ve used this word a lot, but it’s beautiful. The piano pushing the song forward with Eva’s ethereal vocals drifting forward, combined with the still heavy drums make for such a cosy listen in an album that is equally brutal as it is soft.

‘To Resist Forgetting’ absolutely crushes my eardrums. The heaviness and brutality shovel disgusting riffs into my ears and I love it. Even if there is a fade-out… It’s sandwiched between some softer tracks which make it even more hard-hitting, as it leads into ‘The End of Eternity’ which is such a hard-hitting track to finish off the album with, and in fact the three albums in their discography that are intrinsically tied together.

The new album serves as the final part in an unintended trilogy that began with 2015’s ‘Grievances’ and continued with 2018’s ‘Time Will Die And Love Will Bury It’. ‘Where Myth Becomes Memory’ serves as a culmination of a period of creativity that has exalted ROLO TOMASSI to their loftiest status so far as a band, with a singular vision where the most savage, unhinged sonics can co-exist harmoniously with epic cinematic elegance and grace.

Whilst I’m not hugely familiar with all of their back catalogue, ‘Where Myth Becomes Memory’ has really hit a spot for me. I’ve said before that nowadays I struggle to find music that really jump out and stick in my ears after just a couple of listens, and this is absolutely one of those standout albums. I’m so chuffed to see the success this band are having after a slow start to their career. As this is album 6, after all. It’s well deserved, as they’ve truly put together yet another outstanding record.

Rolo Tomassi have gone above and beyond my expectations and I am so so so excited to see the band live later this month, and I very much hope they make it through the whole of their upcoming UK tour without any covid difficulties.