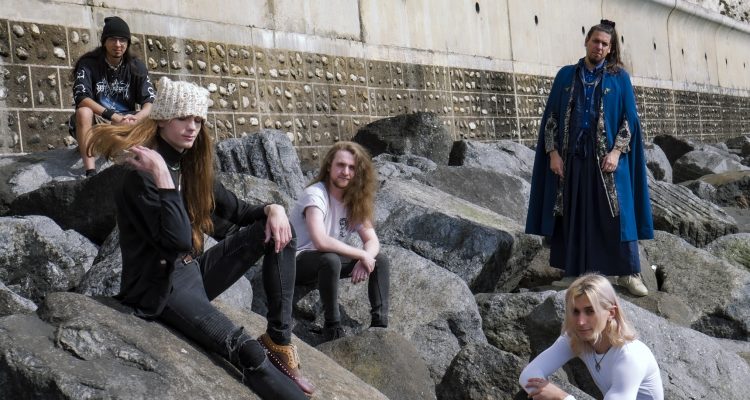 Azure are a fantasy-themed progressive rock band from Brighton, United Kingdom. Their debut album ‘Wish for Spring’ was released in 2017, followed by their 20 minute EP released in 2018 called ‘Redtail‘, which is actually one song. Azure’s music is like a breeze of fresh air.

Fast forward to June 2021 and we get a new album called ‘Of Brine and Angel’s Beaks’ and oh boy is this an album.

The record kicks off with a small dreamy intro and after that, we get the song ‘Self-Crucifixion’. Their style is immediately recognizable when the song starts, with the happy-feeling melodies and the chugging riffs. The vocals take the spotlight after the intro and for a good reason, insane vocal delivery from vocalist Christopher Sampson, both range-wise and timbre-wise.

This album sure sounds less “happy” than their previous releases – but don’t worry, that cheerful spirit is still there but less apparent than before. A great example for that would be the song ‘Lustre: Siphon of Umbra’, where some of the riffs and licks sound dark but are contrasted with lighter melodies played by the synth. Azure never fails to have amazing melodic hooks, and this song especially has a bunch of them. It somehow goes from their usual style into a very epic sounding power metal song that will surely get you singing along at the top of your lungs every time.

This album really is darker than their previous work and the next songs really confirm that thought. ‘Mercy’ is probably the heaviest song here, it has some teeth-grinding riffs all over and not to mention the lovely vocals and soothing synths.

The title track is a ballad, full of acoustic guitars, vocal melodies and captivating sound design – it also falls under the darkness this album is going for, especially around the end, very haunting.

Album artwork for ‘Of Brine and Angel’s Beaks’

‘Cup of Poison’ is another gem of a song that has everything you’d expect from an Azure song with the incredible addition of a violin that makes very subtle appearances on the song but really drives it forward.

I feel like I haven’t mentioned the guitar playing that much but ‘Ametoko II – Cloudburst’ is a good place to do that. The leads on ‘Of Brine and Angel’s Beaks’ are absolutely wonderful, tasteful shredding by guitarist Galen Stapley and all-in-all incredible performance.

The production is also a big step-up from their previous releases with Gareth Mason (mixing engineer) really pushing the audio quality forward with their production skills.

This album is a strong album of the year contender for me and with good reason. The composition is astounding and it really takes you to fantastical soundscapes. I feel like I’m repeating myself but Chris’s vocals on this album are breathtaking as well as the whole band’s performance. I loved the album and I would definitely recommend giving it a listen or twenty.