2020 In Review Part Two: The Ones That Got Away 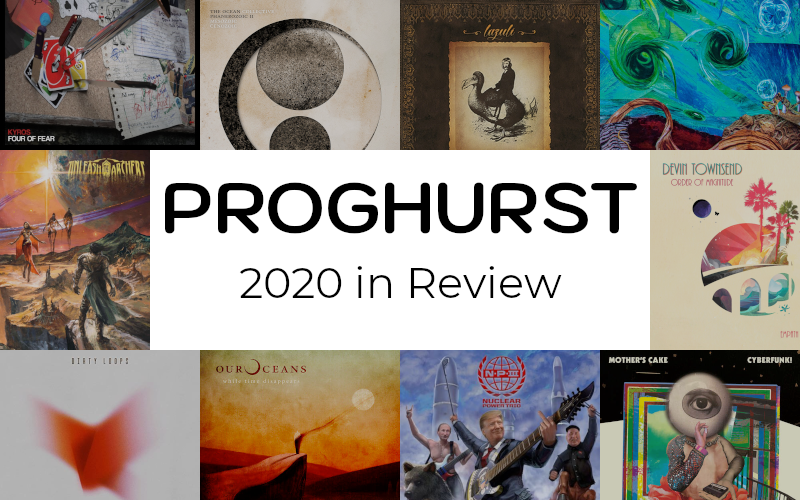 Naturally, it’s impossible for me to get around to writing full-length reviews for every album I’ve listened to this year. Sometimes I’ve run out of time, or other times I’ve not had enough interesting things to say to justify any input. So, I’m going to use this opportunity to go through some of my favourite albums this year that just missed out on a full review for one reason or another.

Now I may be biased because I was at the live show in which this DVD+CD was recorded at, but it’s my favourite out of the lot that been released this year. Devin played a wide eclectic mix from his discography with a killer lineup of musicians to support him. The visuals were fantastic, the cinematography was on point, and the general goofiness of the various on-stage personalities made the entire performance entertaining, not just the parts where they’re performing music.

Article from this tour: Link

Another shorter release that I wanted to do a full article for but just ran out of time. I wasn’t overly familiar with Dirty Loops until the start of this year, but I absolutely love their funky harmonies and their clear Michael Jackson influences that bring funk into the modern era. The bass playing is absolutely outstanding, I love the accompanying brass, the vocal runs, and obviously the drums. This EP ticks so many boxes for me musically – and after a few years hiatus, I can’t wait to see what this trio comes up with next.

This is a sludge album I listened to a few months back, thought it was absolutely awesome, and then didn’t ever properly revisit. It’s one of the reasons why I love writing these lists because it forces me to revisit music that I’ve enjoyed throughout the year. There’s such an interesting combination of sonics, particularly in the guitars which are displayed from the get-go in the introductory track ‘Procurement Of The Victuals’. The songs never fail to keep me engaged with their complicated polyrhythms and melodic writing that is hard-hitting to the max.

Kyros slipped this one late in the year with little promotion, ‘Four of Fear’ is a four-track EP that gives each of the four members of the band a track to shine with. Euro-pop meets dubstep and 80s production in this whirlwind of short but snappy tracks. I’d recommend checking this out as a fun ‘bite-sized’ version of what Kyros can offer.

Remember February? Back before the pandemic wreaked havoc over the world? I remember February for this fantastic release from Lazuli. Whilst I wasn’t a huge fan of their previous studio album ‘Saison 8’, ‘Le Fantastique Envol de Dieter Böhm’ brought home the bacon for me. It’s such a wonderful album of french romance and lustful Gilmour-esc guitar work. If you’re a fan of Porcupine Tree’s style of music, then I’ll have to leave you with a hard recommendation to check out this work.

Since this album was released, long term guitarist Gédéric Byar has left the band to pursue other interests. It leaves a hard gap to fill, but the band has quickly gotten on board Arnaud Beyney as a replacement which bodes well for the future of this musical outfit. As well as their upcoming acoustic release for 2021…

I didn’t revisit this album as much as I should have, but it’s a complete banger. If you’re a Mars Volta and or Red Hot Chili Peppers Fan, then this is a great set of tracks to get your teeth into. The album artwork is wonderfully absurd, and the music lives up to that same theme. I love the descent as the album moves forward into a more avant-garde synth-heavy sound, particularly with the track ‘Cybernova’. Every song has it’s own unique feel and aggressive to it making this great for some funky dance vibes as we lead into 2021.

Favourite Song: The Operator (&) Hit on your Girl

A short but political EP featuring Donald Trump, Vladimir Putin, and Kim Jong Un. Yes… Really. It’s a lot of fun with plenty of Iron Maiden influence, particularly in the basslines. With tracks like ‘Grab ‘Em By The Pyongyang’ and ‘Mutually Assured Seduction’, this album isn’t for the politically faint-hearted. However it is entirely instrumental, so if you just want to vibe to 20 minutes of funky progressive 70s style metal, then this is surely for you.

Favourite Song: Ukraine in the Membrane

Our Oceans – While Time Disappears

A very late discovery in the year for me, but still a top tier album and one I plan on revisiting a lot come 2021. For me, it’s a blend between Radiohead, Jeff Buckley, and Leprous. Huge builds and soundscapes with incredibly powerful vocals to tie it all together in this dark and twisted release. There’s no harsh vocals or distorted guitars, just very clever use of instrumentation to create these fantastic climaxes that make me want to melt into my chair in awe.

Our Oceans ‘While Time Disappears’ CD

This is one of the bigger releases from this year that I’m frustrated I didn’t have the time to cover. As much as I thoroughly enjoyed listening to The Ocean, this album is the end of a huge concept project that’s over a decade long about the different eras of prehistoric history. I don’t have enough of the background knowledge about the other releases to make a fair review so this got put on the back burner until I ran out of time. If you aren’t already aware of The Ocean, ‘Pelagial’ is the best album to start off with.

The Ocean are a post/sludge band from Germany that has gone under a huge array of lineup changes with Robin Staps on guitar staying at the core of the band since it’s inception. Throughout the album, we’re met with banger after banger of awesome sludge.

One compositional choice that really takes my ear is the blend of brass instruments that just add a bit of extra unexpected oomph to the soundscape of the music. ‘Jurassic I Certaceous’ uses this very prominently and subsequently gets my love as the best track of the album. There’s so much juice in there that’s impossible not to enjoy.

It’s been a while since my power metal phase, but ‘Abyss’ has well and truly brought it back. I didn’t realise that I was missing pure cheese from my life until I gave this album a listen, and it absolutely delivers. As with many bands in the power metal genre, the lead vocals are absolutely off the rails when it comes to expressivity and range.

The arrangement is dense, full of life, and spouts out high energy, feel-good vibes. Even whilst doing the most mundane of tasks, if I’m listening to this album I can close my eyes and fly a chariot powered by unicorns into the gates of heaven.