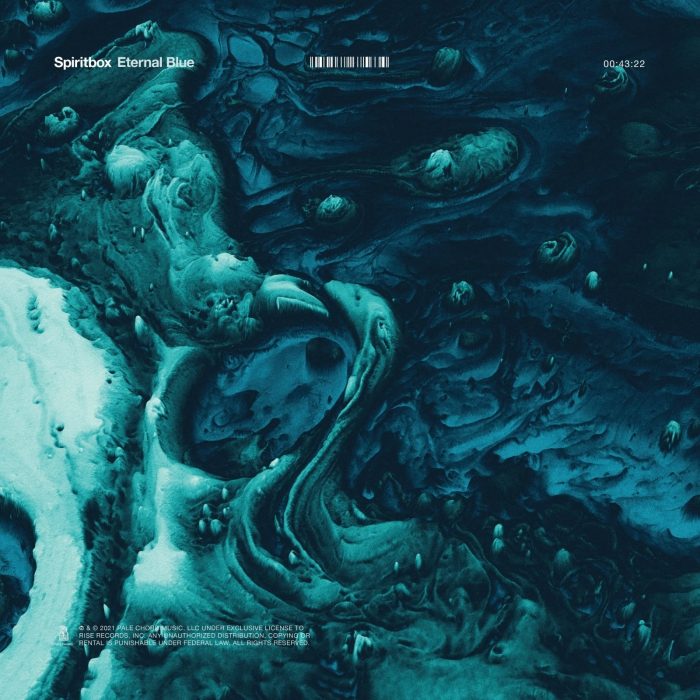 The artwork for ‘Eternal Blue’

After two EPs and a handful of singles, Spiritbox has finally released their highly anticipated debut album, ‘Eternal Blue’. The progressive metalcore act found both critical and commercial success with the release of the single, ‘Holy Roller’, in July 2020, and they’ve been growing ever since. Their combo of djenty riffs, breakdowns, and harsh vocals has been going strong from 2017’s self-titled EP, to now, and that’s no different in this album.

‘Sun Killer’ starts things off on a high note. Right away, Spiritbox introduces some electronic elements that are used sparingly throughout the album, and it’s one of my favourite parts of this project. A melancholic vocal melody carries the track until the final 30 seconds where we’re treated to an explosion of screams and pick scrapes. It’s always a good sign when the opener is one of the most impressive songs the band has written.

Next up is the first of ‘Eternal Blue’s’ five singles, ‘Hurt You’. Like many songs in Spiritbox’s still young discography, it bounces back and forth between screamed vocals and melodic hooks. It can’t be overstated how much of a driving force Courtney LaPlante’s singing is in this album. She has some of the best screams in the genre and her clean vocals add to every track they’re in.

‘Eternal Blue’s’ sole guest feature comes from Sam Carter of Architects, in ‘Yellowjacket’. Unfortunately, I think this track is a bit of a missed opportunity. The song banks heavily on the dynamic between the two singers and it doesn’t work as well as I would’ve hoped with Courtney’s vocals taking a backseat for much of it. That’s not to say it’s bad, the instrumentation is technical as ever and both vocalists give a good performance. It just doesn’t have the same polish as some of the other tracks.

‘Secret Garden’ lacks harsh vocals, but unlike a similar track later in the album, it keeps the heaviness from previous songs. The verses here contain some of the grooviest guitar and bass riffs on the record, whereas Courtney’s singing carries the chorus. It’s another well put together track that’ll have you head-banging despite the absence of screams.

‘Silk in the Strings’ stands in stark contrast to ‘Secret Garden’, in that it has no clean singing. With standout riffs and head-spinning changes in tempo, this song is sure to be a hit among fans of the band. This segues nicely into the track that catapulted them into the mainstream, ‘Holy Roller’. It’s a fairly straightforward song, in that it’s a just under 3-minute onslaught of some of the deepest screams and borderline growls you’ll hear on this album. With an epic breakdown and accompanying horror-themed music video, it’s easy to see why this track achieved the popularity that it did.

The title track takes a softer tone than the previous two, but the quality remains. This song even has some light synth work sprinkled in the background. This run of 3 songs is easily the strongest point of the record. They flow well into each other and the band plays into their strengths better than most on a debut album.

‘Eternal Blue’ veers away from the formula with the next song, ‘We Live in a Strange World’. It begins with an electronic, borderline trap beat which is a little off-putting at this point in the album. But the song opens up perfectly in the second half into the kind of metal we’re used to from Spiritbox. Admittedly, on a first listen, I would’ve called this my least favourite track, but it has since grown on me. They’re clearly experimenting with their sound and the result here is a positive one.

‘Halcyon’ starts off like any other song, with good riffs, good vocals, and electronic elements peppered in here and there. It is shaping up to be another good, if average track. Until the last 30 seconds when it flies into one of the nastiest breakdowns on the record. It’s short-lived, but one of a few great and memorable moments from this album.

The final track returns to a slower and more emotional emphasis. ‘Constance’ opens with an ethereal sense and lyrics that touch on the death of a loved one. While there are flashes of heaviness, the song, to its credit, never explodes like so many others on this album. It’s different from every other track in both tone and sound, and I think that makes it the perfect finale.

Whenever a band breaks through to the mainstream, opinions are often split, some of the mindset that they can do no wrong, others that they’re “undeserving” of their success. I find myself somewhere in between the two. ‘Eternal Blue’ is not a perfect album, but it’s well made and far surpasses the majority of debut albums out there. Spiritbox has room to grow, and this is a good first entry in what is hopefully just the start of a long career.