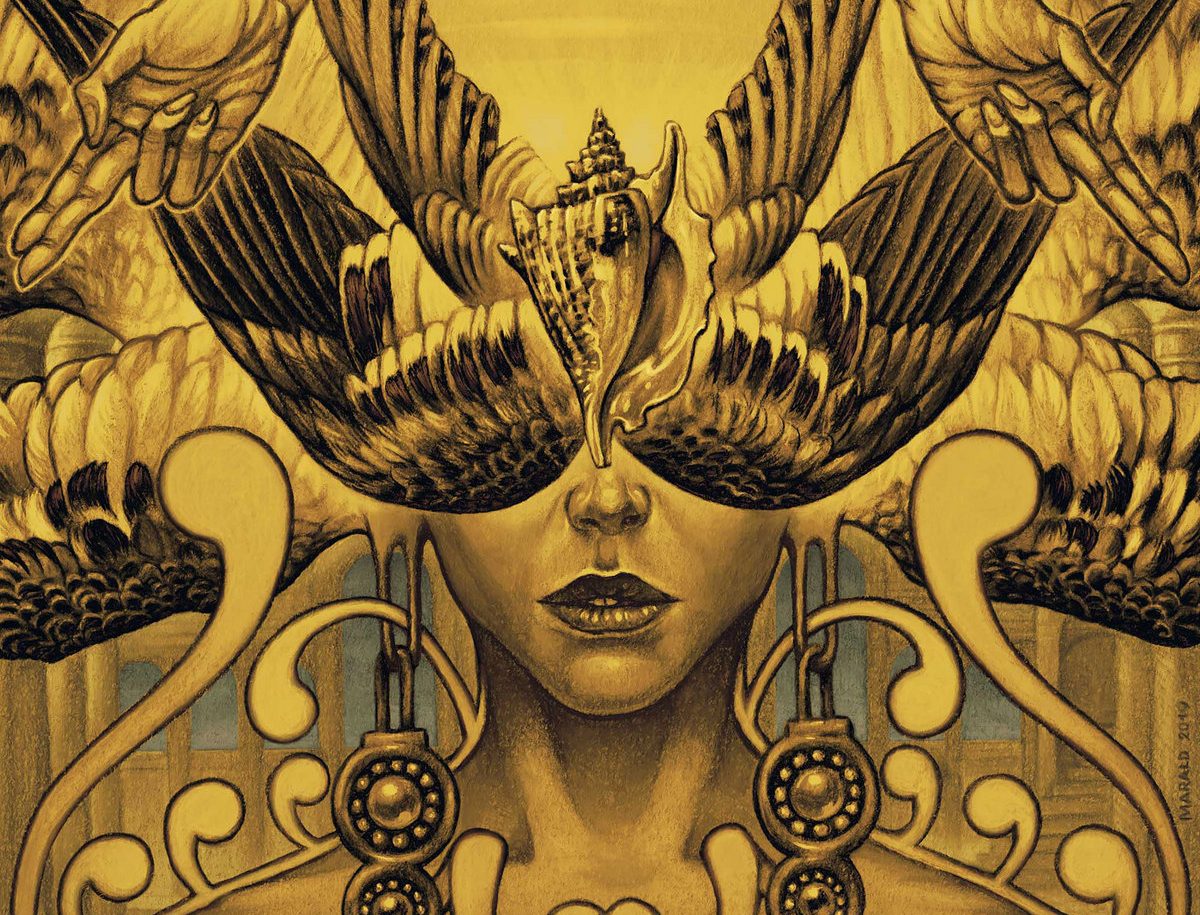 The album art for ‘Etemen Eaef’

The five-piece progressive sludge band Dvne recently dropped their second full-length album ‘Etemen Ænka’. Similar to their 2017 release, this album continues to push forward Dvne’s brand of sci-fi infused metal. With a runtime of over an hour, it’s one of the lengthier releases I’ve covered this year. But ‘Etemen Ænka’ fills the time well and remains an engaging record from beginning to end.

‘Enûma Eliš’ is the name of the high energy opener. Right away we’re greeted with fast-paced riffs and drumming action. One of the greatest strengths of Dvne is that they have two harsh vocalists, Victor Vicart, and Daniel Barter (who both double as guitarists). These two duelling vocalists create a fantastic texture that never gets old as the record progresses. In an album full of long songs, ‘Enûma Eliš’ is perhaps the most notable of the tracks under five minutes. It’s quick, it packs a punch, and it also sets the tone for the rest of the album.

‘Towers’ was the song that really blew me away on my first listen. The front half of the song is an onslaught of heavy and groovy licks, punctuated by the back and forth between the two vocalists. Midway through the track, we get the first meaningful dose of keys on the album in the form of a beautiful, if simple, supporting melody. The keyboard and synth continue to develop in the back half of the song. The impact that keyboardist Evelyn May has on this album cannot be overstated. The fusion of keys with the heaviness of the rest of the band is a driving force in this album and one of the factors that sold me on Dvne right away.

‘Court of the Matriarch’ is another favourite of mine on the album. And it’s the first track to feature mainly clean vocals. Though they’re used sparingly throughout the album, the clean singing comes in at just the right times, and they always carry just enough emotion to elevate the track. The song sifts through a few infectious riffs before landing on the one that plays out the last minute of the song. It’s a powerful lick that’s sure to have you head-banging. And it’s one of the best moments on the record.

Another offering of emotional clean singing comes early in ‘Omega Severer’. The first verse, which repeats twice, holds a sentimental and memorable vocal melody. Though there is a more mellow section in the middle, they structured this track similarly to ‘Court of the Matriarch’,. a slow buildup to an immense final riff. In both tracks, the payoff is worth the wait. There’s a handful of contenders on this album, but at this point, I’d say ‘Omega Severer’ is my favourite track.

‘Sì-XIV’ begins harshly, instruments and harsh vocals working together to create an intense opening. That opening melts into a slower, more soothing section, only to pick right back up with high energy aggressive riffage. The song-writing present in ‘Etemen Ænka’ is key to this album’s success. A project of this length and with this many ideas could easily turn into riff salad. But each song is well crafted, and the album flows smoothly from one track to the next.

A calming intro to ‘Mleccha’ is a positive break from the action. But like every track before it, ‘Mleccha’ is a dynamic, well-composed collection of riffs. Now, I haven’t yet touched on the lyrical content of the album, but there is an entire universe to unpack for those who are interested. It acts as a prequel to their 2017 record ‘Asheran’. Though the sci-fi themes are undeniable, many of the lyrics are vague and are left up to the interpretation of the listener.

‘Asphodel’ is the penultimate track, and aside from a pair of interludes, it is the only truly quiet song from beginning to end. There are no heavy guitars, almost no drums, and it’s not something that would even be considered adjacent to metal. The change of pace is unexpected, but not unwelcome. The song places the centre of attention on the guest vocalist, Lissa Robertson, adding yet another dynamic to the album. The whole song has a borderline eerie feeling to it, but it fits really well, especially as the lead-in to the closing track.

And that closing track is ‘Satuya’. The 11-minute epic is easily the longest on the album, and it is a worthy finale. The first four and a half minutes are entirely instrumental before the harsh vocals explode into action. Midway through the song, there’s a terrific moment where both the synth and bass are brought to the forefront of the mix. ‘Satuya’ is one big release of energy. It is cathartic, and it beautifully bookends the experience of this album.

In most cases, a long runtime makes a bad album worse and a good album better. Of course, that can be subjective, but in this instance, I believe it to be the latter. Dvne has crafted a consistent album with no low points in spite of its length.

Since I came across this album, I’ve found myself constantly relistening to ‘Etemen Ænka’. It’s a gripping record that feels like a breath of fresh air. It’ll no doubt find a place on some Album of the Year lists, and there’s a good chance it’ll be on mine as well.