Avatar at The House Of Blues in Chicago 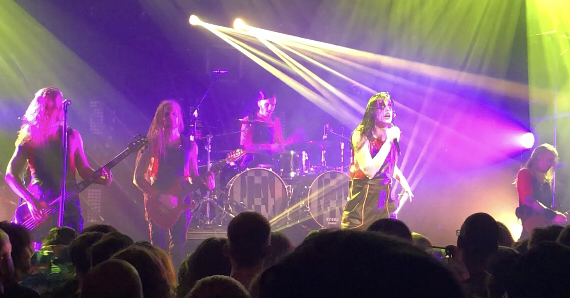 “We are happy that you are here so let’s all take care of each other and enjoy some violent music!” summarizes Avatars frontman Johannes Eckerstrom addressing the crowd Wednesday night at The House Of Blues Chicago. Violent yes, as Avatar has become one of the most recognized power metal groups out there but there are so many other emotions and genres that come through Avatars music as demonstrated at the show which makes them truly unique.

The stage was set much more simple than their last headlining Avatar Country world tour of 2019. They ditched the giant throne, stairways, and lecterns, however, they kept their giant light up Avatar sign along with having more present lighting options on stage allowing for a much more extravagant light show to take place.

The set opened with all five members consisting of Eckerstrom, bassist Henrik Sandelin, guitarists Jonas Jarlsby and Tim Ohrstohm, and drummer John Alfredsson all entering and coming out to the front of the stage straight-faced and still as if they were taking part in a group staring contest with the audience. Was this actually a Blue Man Group performance? They remained that way for the entire first song ‘Colossus’ with the only movement being the minimum amount needed to play the instruments and slight head bobs to the groove. This was a very fitting theatric as Colossus is a very mechanical and cold song that leaves the audience anticipating their chance to shout the tracks title along with Eckerstrom during its chorus.

As the audience awaited the typical stage antics of the hair swinging, headbanging, and kicking over of mic stands the second song Let It Burn brought a little more animation with it however all band members still remained at the very front of the stage. 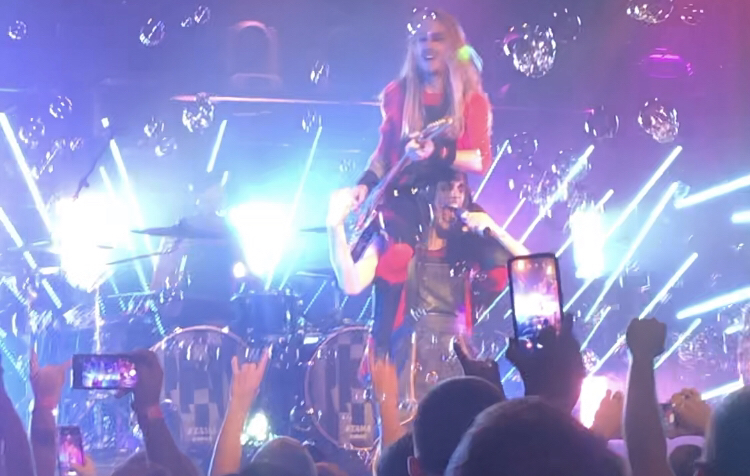 Finally, the anticipation of those sought antics came through during their third song Silence In the Age of Apes one of the singles off of their most recent LP ‘Hunter Gatherer’ as drummer John Alfredsson returns to his main drum set up high in the middle of the stage after playing a small set while standing for the first two songs. We saw the hair swinging in full effect with its opening riff with Eckerstrom inviting the audience along to chant together during the chorus phrases. The lighting setup was also now in full force as the band is hit with rhythmic beams from above, behind, and from the side!

Other moments of high anticipation throughout the night occurred with the song Bloody Angel as both guitarists Jarlsby and Ohrstohm again come front stage but this time since it was only those two it led to excitement from the audience as they awaited the beautiful duet between the two at both the intro and outro.

Another moment of anticipation occurred as all of the band left the stage except for Eckerstrom as a grand piano was wheeled onto the stage. For the audience, this was surely anticipated to be for the song Gun, a solo ballad featuring Eckerstrom and piano also off of ‘Hunter Gatherer’. Following some tinkling of the ivories and another uplifting message of togetherness from Eckerstrom he then began to play the intro to Gun. During this solo performance, the lighting took on a whole new life with the look of fireworks going off in the background. Very fitting and touching for this ballad that always brings a tear to my eye.

If there is one thing that was surely anticipated it was the performance of the new Avatar single Going Hunting which was released two weeks ago at the start of the tour of the same name. I have yet to mention the uniformed look the band had for this tour where each member is donning denim overalls over either red shirts or tank tops. Eckerstrom also continues to wear his signature deaths jester makeup as well as his fedora hat and cane. So between their hunter look and naming the tour Going Hunting the anticipation for the audience was met with the Going Hunting performance.

One moment I did not anticipate but was pleasantly surprised by was a bubble machine going off filling the stage and venue with bubbles during Avatars performance of The King Welcomes You To Avatar Country. Bubbles at a metal concert? Yes and I’m all for it! It’s not that the song wasn’t anticipated. As soon as you saw Jarlsby don the outfit of the King aka ‘Kungen’ which was the role he played in Avatars 2018 concept album Avatar Country we all anticipated that he was about to start the twang of the opening chords to this unique bluesy country and sometimes even poppy song with metal vocals.

The King Welcomes You To Avatar Country was the final song of the main set followed by three encores with the final encore being another anticipated song their topmost listened to track Hail The Apocalypse.

What I love most about Avatar live is the clarity of all parts heard from Sandelin’s punchy bass tones to both guitarists layers along with Alfredssons intense drumming. It never feels muddied up live which is a hard feat to pull off in the metal world. Combine that with Eckerstroms vocal range of low basses and high operatic melodies while constantly switching from standard vocals to grunts and shrieks and making it seem easy (which it is not) it all adds up to an incredible performance and one that all metal and dare I say… prog fans like myself to enjoy.