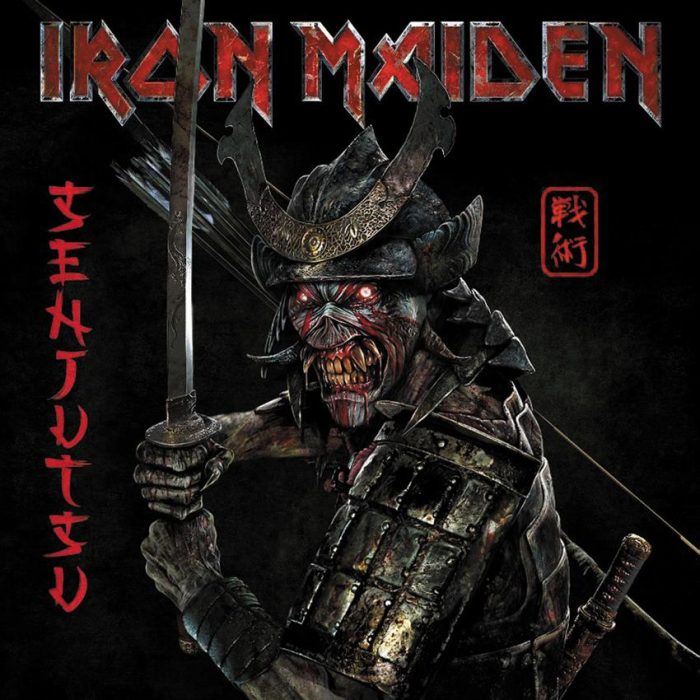 The album artwork for Senjutsu

Legendary heavy metal band Iron Maiden released their 17th LP this week to high acclaim. It’s their second double album in a row, following up 2015’s ‘The Book of Souls.’ ‘Senjutsu’ is a sprawling record full of lengthy progressive epics, and at 81 minutes it has its share of surprises.

The title track kicks things off with rhythmic drums and marching riffs. It has a slower pace that’s present in many songs on the album, but that’s not a negative. Maiden has chosen a focus on melody over speed and intensity, and it serves them well here. Another theme of this album is how overly drawn out some tracks are. But I don’t think that’s a problem with the title track’s 8 minute runtime. The instrumentation is tight, and it sets a solid tone for what’s coming.

Next up are the album’s two singles, the first of which is ‘Stratego’. This track features the trademark drum and bass gallop that Iron Maiden is so good at. The synth plays a big part here too and gives off an 80s feeling. While it’s a quality song, I think it’s far surpassed by lead single, ‘The Writing on the Wall’. The acoustic intro is dripping with western vibes and catchy songwriting. Bruce Dickinson shows he hasn’t lost his touch, belting out an infectious chorus. This track is everything you could want from a good single, and it works well within the context of the album.

‘Lost in a Lost World’ has a mellow start, which is an unexpected strength of this album. They know when to give the listener a breather before throwing them back into the riffs and anthemic choruses. Early on, the vocals and guitar mirror each other’s progression in what is a cool moment. Another groovy chorus directly follows this, and while Steve Harris’ bass playing is a highlight in every song, it is especially a standout in the mix on this track. About 3 minutes of exceptional instrumental playing leads into the last chorus, and then a laid-back ending caps things off. This is my favorite song on the album, and it’s easily one of the most memorable.

Another slow first minute takes us into ‘The Time Machine’. This song has a more standard verse-chorus structure than some others on the record, but not to its detriment. Maiden’s guitar-driven execution of this structure elevates the track significantly. Just like ‘Lost in a Lost World’, it ends with the same tone it started with, leaving another energetic track in ‘Senjutsu’s’ runtime.

Disk 2 starts off with the sound of waves, and a track called ‘Darkest Hour’. This song once again begins with a quieter section that nails the mood they were going for. Much like the title track, this slower pace continues even when the distorted guitars kick in. The whole track is a bit more melancholy than anything else here, and the backend of the song contains some of the best guitar solos on the album. I wouldn’t say this song is a ballad, but it has a unique atmosphere.

And so we arrive at the final 3 tracks, all three written by Steve Harris, and all three over 10 minutes long. Let’s start with ‘Death of the Celts’ and ‘The Parchment’. In all honesty, this is where the album begins to lose my interest. The first of these two songs has a 4 minute instrumental section that just doesn’t have as much life as earlier in the album. And, ‘The Parchment’, similarly lingers on ideas and riffs for too long. Neither of these songs display the progression and melodies that were abundant until this point on the record. That said, neither track is without its merits. The ideas that they do have are well-executed, it’s just that the lengthiness of everything comes back to bite them here.

‘Senjutsu’s’ finale, ‘Hell on Earth’, wins Maiden back some points. After the intro, they return to the galloping sound that never gets old. This song is just as long as the previous two, but it contains so much more energy as it transitions from one lick to another. ‘Hell on Earth’ may not reach the same highs as anything from disk 1, but it is a solid finale for such a long album.

Every time a classic band releases a new record it’s sure to stir up discussion from fans who’ll either love or hate it, ‘Senjutsu’ is no exception. Anyone who expected Iron Maiden to reinvent the wheel with their 17th studio album will be disappointed, and I think with a little trimming, it would see a lot of improvement. But as it stands, it’s still a well-crafted album that longtime fans will most likely enjoy from a band whose legacy extends back over 4 decades.