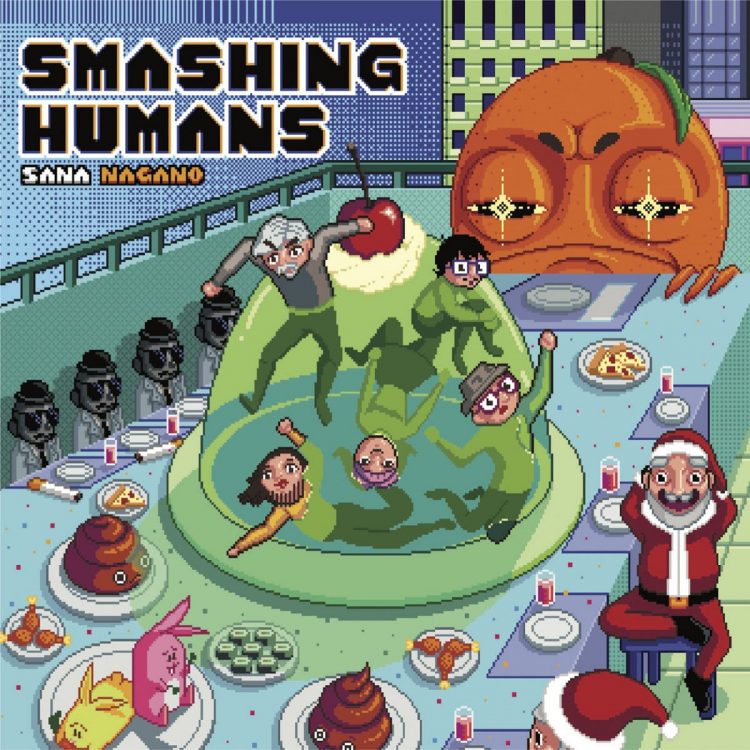 The artwork for ‘Sana Nagano’

New York based violinist Sana Nagano embraces a chaotic and noisy energy on the debut album of her quintet – with Peter Apfelbaum on tenor saxophone, Keisuke Matsuno on guitar, Ken Filiano on bass, and Joe Hertenstein on drums. An hour of complex, well-written and produced Avant-prog tinged jazz awaits the listener. Fantastical, yet at once grounded, the music presents a certain alternate reality – possibly a perfect soundtrack to the existing circumstances.

At their creative best, this band sound like an even more chaotic incarnation of ‘Cheer Accident’ which is certainly not an easy sound to pull off. At their most boisterous, their compositions would fit right into noisecore jazz records a la John Zorn. The album really does also mirror the art that sits on its jacket (depicting the five musicians trying to escape green jelly in an urban setting) ebbing and flowing between spurts of unbridled energy and fatigue.

Nagano and Apfelbaum are vibrant and resourceful players, welding timbres and almost merging into a single instrument. Playing off one another in a show of prodigious talent, the pair elevate the record. The bass and drums form a solid rhythm section that at once anchors and forms the driving backbone of the songs. This is indisputably felt on the opening track, Strings & Figures, starting off with straightforward riffing along with the rhythm section, but slowly devolving into a meaningful cacophony (with help from lovely guitar work) before resolving back into the head-in melody and speeding up into its end.

Together the musicians create a steely draught of music, densely drafted compositions punctuated by improv departures – which captures the dynamic of live performances. This attitude to composition lends itself to well-drafted moments of enthralling chaos, exemplified by the sharp ‘Loud Dinner Wanted’ and its riveting instrumental interplay.

Scalar solos traded by Nagano and Apfelbaum are slowly built into a magnificent edifice of group voicing before devolving on ‘Humans in Grey’. As the song dissolves in a long, drawn-out passage, it seems to serve a certain cynical purpose in the album, conveying a feeling of weariness in the backdrop of urban bustle.

‘Heavenly Evil Devil’ is a noisy, brutal scrap, again slowly collapsing after a brisk introduction. These songs echo the patterns and structures employed by Anthony Braxton but applied to an Avant-prog sound reminiscent of bands on labels like Cuneiform Records (like the previously mentioned ‘Cheer Accident’).

Smashing Humans ends up as a powerful and inventive suite. It is a towering monolith that walks the ever-present musical tightrope between going all out and restraint. The remarkable synergy and interplay amongst the five skilled musicians serve up an enrapturing album that pulls the listener by the ear and demands their attention for the succeeding hour.

The album can be found on Bandcamp