Kyros and The Paradox Twin at The 1865 in Southampton 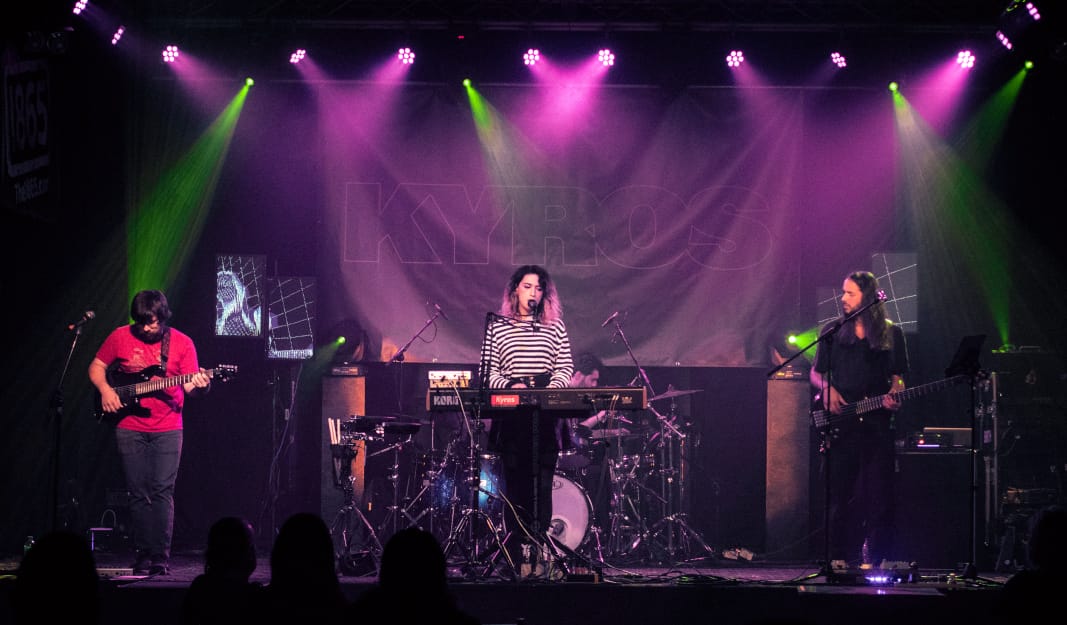 Kyros on stage – 📷  from Andy Robison

n.b Grace has previously worked with Shelby Logan Warne (Kyros) on a video shoot for her own solo music projects.

The last band I saw perform live before the pandemic started was Lazuli at ‘The 1865’ – so it’s only right I’m kicking off my return to seeing live music by returning to this same venue once again. It’s been a truly bizarre 18 months for us all, but I’m incredibly glad that this is the first concert I get to see after such a long break. Originally ruining my streak of seeing at least one live music act a month for well over 5 years.

Quick PSA though, if you are going to a gig – make sure you don’t have any covid symptoms before going! Before attending, I took a lateral flow test that came back negative, and I’m also fully vaccinated with a double dose of the Pfizer vaccine. Get your jabs to protect not only yourself, but also your fellow concertgoers. Now, on with the evening.

It was very surreal walking back into a venue after all this time, and I did feel far more comfortable with the seating layout being socially distanced. Tables of two were dotted around the venue 2 meters apart from one another which ended up providing you with a great view of the stage no matter where you sat.

The Paradox Twin were the first band up on stage as a part of this co-headline tour. They had some interesting sounds to offer up, blending operatic vocals with a bit of grunge thrown in for good measure.

The band played tracks from their upcoming album ‘Silence from Signals’ including ‘Sea of Tranquility’ and ‘Cycles’, as well as returning back to their debut LP ‘The Importance of Mr. Bedlam’.

I really enjoyed Diane Fox’s bass playing and how much of a show she made of it. Always making big gestures out of each note with such infectious energy that resonated amongst the audience even at a seated concert.

I did find it a rather curious decision to have the keyboard on stage at a right angle so that whenever Danny Sorrell (Vocals, Guitars, Keys) was addressing the audience, he was staring at a wall. That didn’t make for a particularly engaging stage presence on his part.

Good performance though, and certainly an artist to catch live in the future for fans of artists like Anathema.

We had a short interval for a stage turnaround, and then Kyros were up on stage. 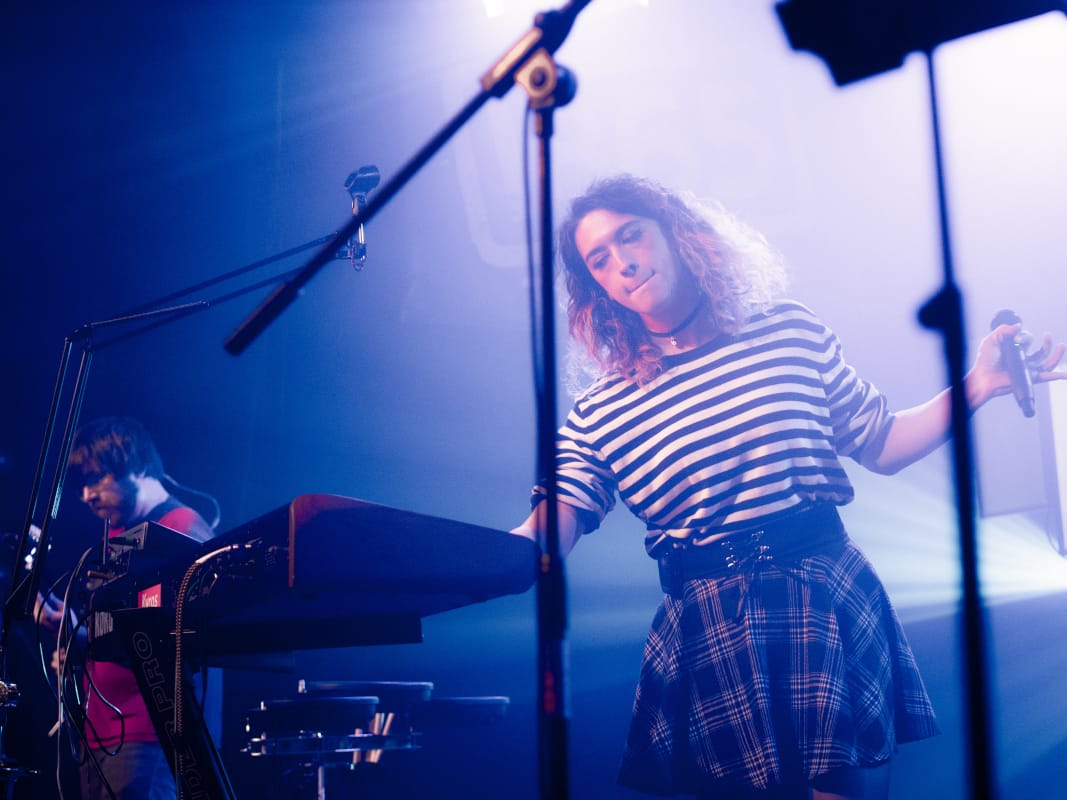 Kyros have been very busy themselves over the last year, releasing ‘Celexa Dreams’ (LP), ‘Four of Fear’ (EP), and most recently ‘Recover’ (Cover songs LP) to keep the fans ticking along. On top of that, they’ve put out a handful of free livestreamed concerts showcasing music from their entire discography if you feel like you’re missing out on this tour!

Lights down, the audience quiet, and Kyros walked on stage to start their set.

Shelby Logan Warne was right in the centre, showing off her vocal pipes and synth skills on the opening tracks ‘Two Frames of Panic’ and ‘Rumour’ – both from the band’s latest studio album ‘Celexa Dreams’.

The band went further back to ‘Vox Humana’ with ‘The Lamb, the Badger & the Bee’ that had great moments of vocal harmony between the musicians with Robin Johnson keeping things tight on the drums.

And I feel like I would be doing the band an injustice if I weren’t to mention the visuals being played in the background. Created and developed in-house by their resident CGI artist Shelby, the visuals added atmosphere and energy to the set on top of the already bubbling band members enjoying their time on stage together for the first time since 2019. 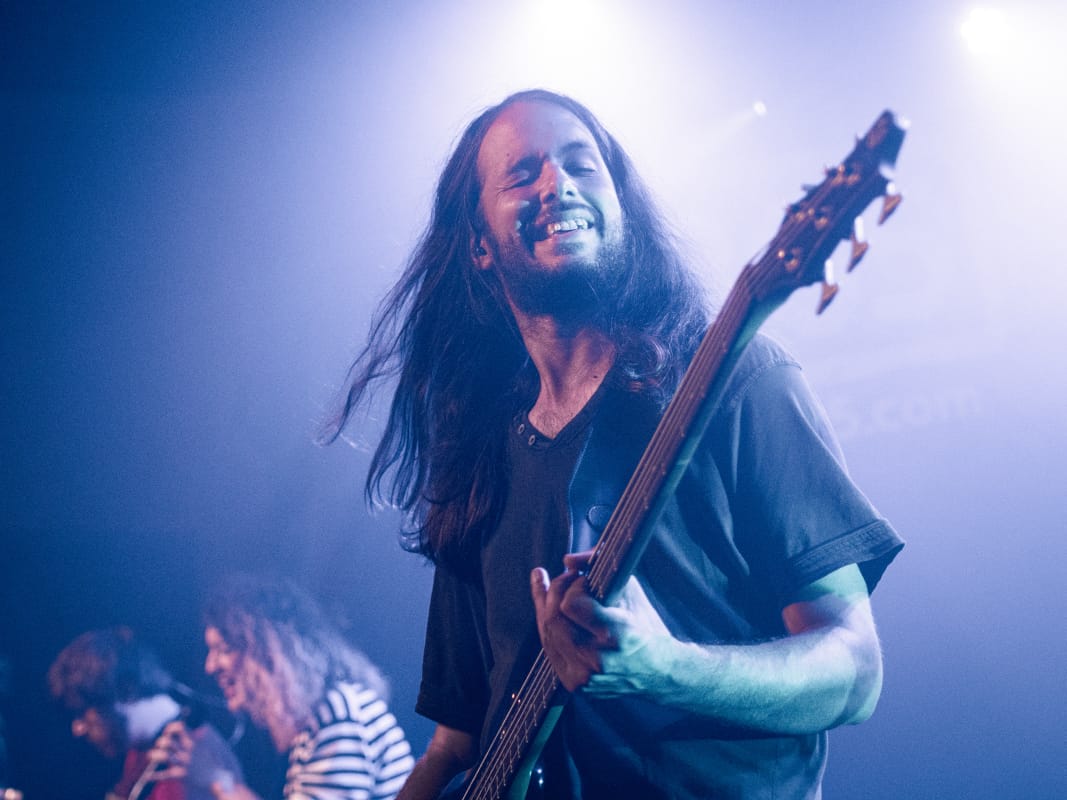 Peter Episcopo laying down the funky basslines – 📷  from Andy Robison

A favourite of mine, ‘Ace’s Middle’ got played – and so I’ve heard it’s one of the most technically challenging songs the band has written, a creation of  American Joey Frevola (Guitars), flown in from the states just for this very tour. It sounded stellar live! And the band had fun with it as the frequent time signature changes kept them on their feet.

The set finished with ‘In Vantablack’ – a 14 minute epic full of everything this band is capable of. High energy synth-pop, crunchy bass licks, 80s drum samples, blended with softer and more emotional moments where Shelby can serenade us with her vocals. Not to mention the ridiculous guitar runs that Joey was playing oh so effortlessly.

Despite a couple of bits of technical difficulties with a footswitch, the set was smooth as butter with Peter Episcopo (bass) styling out any dead moments whilst the crew tinkered with the queues.

Kyros left the audience wanting “More. More. More.” And given we’ve been starved of live music for 18 months, I certainly don’t blame them. I wanted more too. 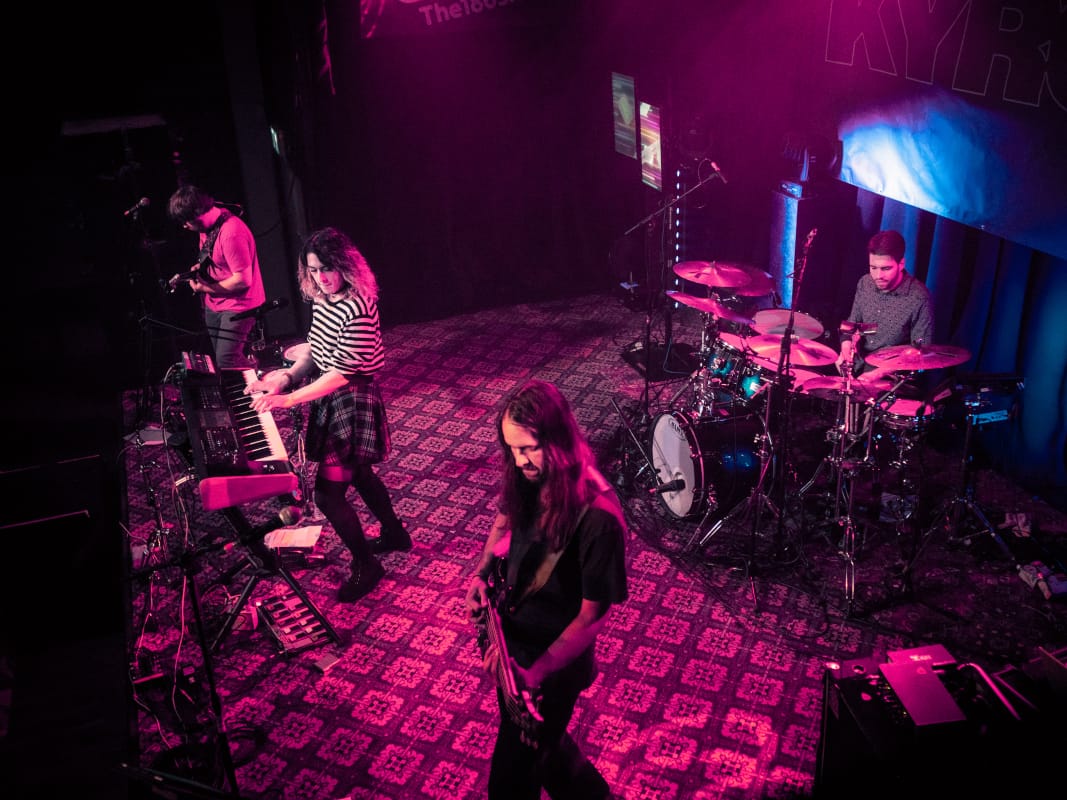