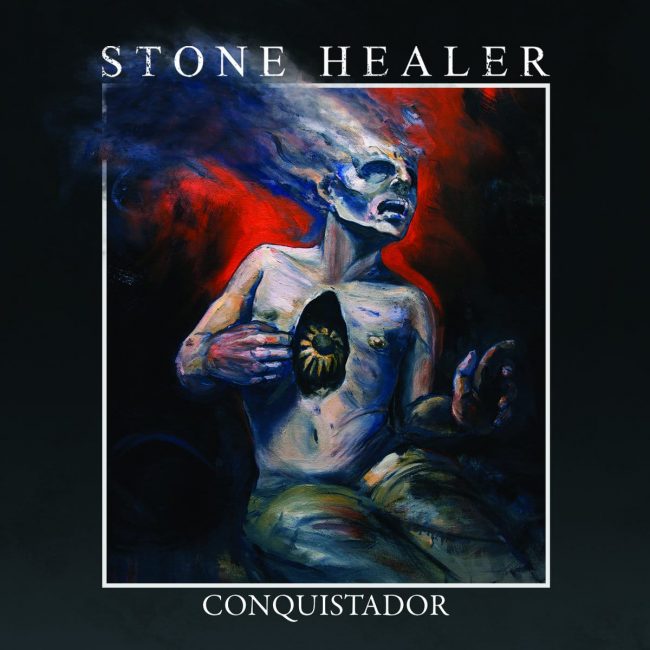 The album cover for ‘Conquistaor’

Stone Healer is the product of two brothers, Dave and Matt Kaminsky. ‘Conquistador’ is their sophomore album coming almost six years after its predecessor. It’s a genre-bending record that is packed full of long songs. That description would fit a lot of prog albums. But ‘Conquistador’ is a truly unique experience and one of the best underground acts I’ve found this year.

The album opens with ‘One Whisper’ which immediately shows off the blend of genres these guys achieve. It begins with an off-kilter acoustic riff before transitioning into an upbeat rock section which sounds like something from the 90s rock scene. From there, the track makes a sharp turn into a more extreme sound, bringing in blast beats and metal licks. Toward the end of the song, a second acoustic riff comes in that is very reminiscent of old Opeth. It’s a great opener that gives a taste of what’s to come.

‘Whence Shall I’ is a much more straightforward track, and it might be my favourite on the album. It starts off with aggressive riffage and continues that pace throughout the song. Harsh vocals and a tight solo after the first verse make this a solid song already. But where it really catches my attention is in the last minute and a half. The riff that closes this track is heavy and groovy in all the best ways. It’s one of my favourite moments on the record and what takes this song from good to great.

‘Surrender’ is the next track, and it’s the longest on the album, coming in at just over 11 minutes. Early on, the song gives a cool blend of acoustic and electric guitars. One strength of ‘Conquistador’ is the mix of rock n’ roll and extreme metal, and ‘Surrender’ is a quality example of that. Around three minutes in, the song slows down dramatically and is carried only by a gorgeous, folky, acoustic guitar riff. As the other instruments and melodic vocals come in, the song progresses nicely back into metal. This is another showcase of excellent songwriting. The combination of so many genres and styles could so easily be jarring, but it never is.

‘Torrent of Flame’ begins with a more laid back tone. Calming guitars and clear bass lead into a proggy and loud riff held together by some rhythmically interesting drumming. The back end of the song is all over the place, often focusing on speed and intensity, but never forgetting to leave room for the melodic sections to shine. Though the bass on ‘Conquistador’ gets lost in the mix from time to time, it is a standout on this track.

The melancholy start to the penultimate song, ‘Until My Will is Gone’ is a pleasant break in the energy. And it’s one of the more emotional points of the album. That emotion is torn away pretty quickly by about five minutes of metal where they do not let off the gas. This may be the best time to mention that I’m not the biggest fan of the harsh vocals present here. They’re more inspired by black metal which has never been my wheelhouse. But they don’t detract from the music at all. “Until My Will is Gone” ends just as abruptly as it began, but it leaves behind another quality entry in this album’s tracklisting.

Behind a brief, but pleasant interlude track is the album’s finale ‘Into the Spoke of Night’. The song wastes no time in picking up the relentless speed and intensity that has been present throughout the whole album. Groovy riffs and blast beats are the driving force behind this track. Midway through the song is a clean vocals section, which, in contrast with the harsh vocals which I really like. This is followed immediately by a classic rock inspired guitar solo before returning to form with more heavy instrumentation. ‘Into the Spoke of Night’ ends abruptly, and I can’t help but feel it would have worked better if it weren’t the album’s closing track. Nonetheless, it is a solid song that encompasses a lot of the styles they were going for.

I find that the first half of the album is definitely the strongest. But it maintains a level of quality throughout that is impressive for any band, let alone one on their second LP.

‘Conquistador’ is a wild album that is inspired by everything from black and death metal, to alt-rock, grunge, and folk. Add prog to that mix and you’re guaranteed to have something interesting at the very least. But Stone Healer does a fantastic job in turning this mashup of genres into something of substance. And it has me excited for whatever they do next.