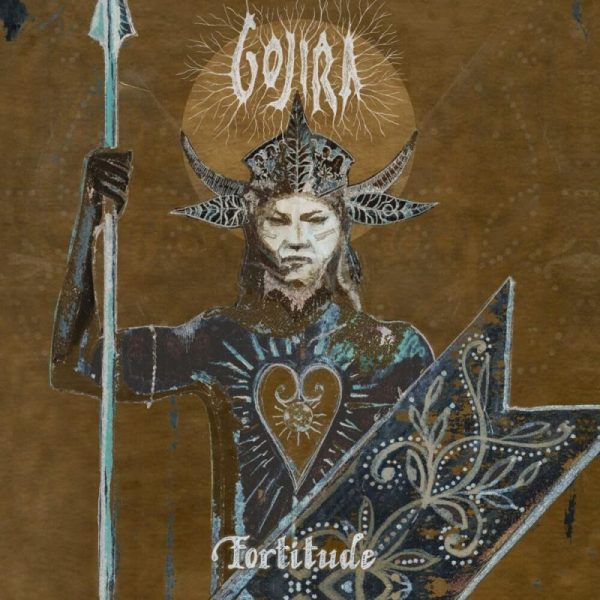 The album artwork for ‘Fortitude’

Progressive death metal band Gojira just released their seventh album, ‘Fortitude’. The 4 man lineup out of France has been around for over two decades. Their popularity has grown with each release, and it peaked with 2016s ‘Magma’. Now, they’re one of the biggest bands on the scene and ‘Fortitude’ one of the most anticipated releases of 2021.

The album opens with three singles, starting with ‘Born For One Thing’. It starts with a blistering riff and continues that fast pace throughout the song. The drums are loud and active. Mario Duplantier continues to capture that proggy and interesting drumming style that he always has. The vocals are intense, but not to the level of pre-2010 Gojira. It’s a good opener that sounds similar to something off of ‘Magma’.

‘Amazonia is one of the most interesting tracks on the album. Released alongside a large charity effort, the song borders on folk metal, bringing in several folk elements throughout that make it a standout track on the album. The lyric, “The greatest miracle is burning to the ground,” is just one powerful line in a song that’s packed full of them. Activism through music is not something that’s new to Gojira, and when paired with the infectious licks in “Amazonia,” you end up with a great song.

If you’re interested in partaking in the auctions they’re being held at the following link: https://propeller.la/gojira

Though I enjoyed the singles for this album, I was most looking forward to the new songs. The first of which is ‘Hold On’. The track’s opening caught me off guard. It starts with just melodic vocals and no instruments. This continues as the drums and guitar kick in, creating an atmosphere I was not at all expecting from Gojira. At around 1:40 in the song the riffs turn heavier and it sounds more like something I’m accustomed to from this band. But that build-up was something different, which I appreciate.

‘New Found’ brings back the high-pitched guitar screeches found throughout ‘Magma’. The verses on this song are everything I like about classic Gojira. Harsh growls and crushing guitar licks. The chorus, however, doesn’t pack the same punch. And being the longest song on the album, I feel it drags on unnecessarily long.

‘The Chant’ is probably the most divisive song on the album. Personally, I think it’s the weakest one on ‘Fortitude’ (unless you count the title track, which is more of an interlude.) When they released this track as a single, I wasn’t at all impressed with it. But it benefits massively from the context of the full album. The riffs are quieter and the vocals mostly clean singing. It’s a catchy arena track that provides a respite from the heaviness of the songs that come before and after.

From that track, ‘Fortitude’ launches right into what might be my favourite song on the album. ‘Sphinx’ opens with explosive riffage, including pick scrapes, and deep growls from Joe that immediately reminds me of the sound they had on ‘The Way of All Flesh’. But it’s hardly a retread of their past work. It highlights what I think is ‘Fortitude’’s greatest strength, which is its versatility. The album brings elements from all their past work together into one record. And it’s done expertly.

‘The Trails’ is the penultimate track, and another interesting inclusion. Similar to ‘The Chant’, the spotlight is shifted away from the riffs, and toward the clean, almost calming singing. The instruments work in the background, supporting the vocals. A stark contrast from the rest of the album. The last 40 seconds break the rhythm that was established in favour of an atmospheric ending, which I love. The whole thing has a soothing element.

What’s not at all soothing is the opening to the album’s finale, ‘Grind’. The pick scrapes are back in full force on this one. Paired with fierce vocals and drumming, it’s clear ‘Fortitude’ is going out with a bang. For an ending track, this has the perfect mixture of melodic and heavy moments. The final riff is both catchy and engaging, and it carries on for three minutes, bringing the album to a close.

Managing expectations for an album like ‘Fortitude’ can be difficult. But this is an album that vastly outshines its singles. It showcases many of the different styles Gojira is capable of from all over their discography.

‘Fortitude’ is not my favourite Gojira album, nor do I think it will ever be. But it’s a step above ‘Magma’ to me, and it’s one of my favourite records of 2021 so far.