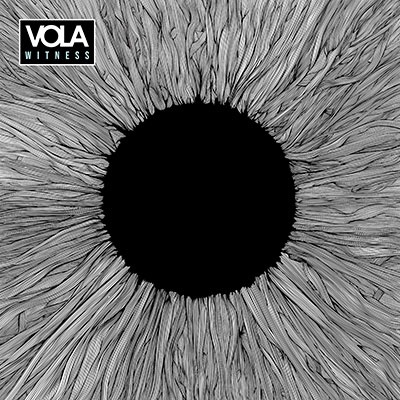 The album cover for ‘Witness’

VOLA is a Danish progressive metal quartet from Copenhagen. Founded in 2006, they released their debut EP ‘Homesick Machinery’ in November 2008. They then released another EP after that called ‘Monsters’ in October 2011. By the time their first full album ‘Inmazes’ was released, the band had found their sound and their production started getting better with every release. My introduction to this band was seeing them open for Haken in 2019, I liked what they played so I decided to check out their stuff and I was hooked. Their last album was released in 2018, ‘Applause of a Distant Crowd’, and now in 2021 they gave us ‘Witness’.

The band released four singles from the 44-minute album ‘Witness’, the first of which was ‘Head Mounted Sideways’ – however ‘Straight Lines’ was the track that the album kicks off with. Both are great songs with heavy riffs and heavenly melodic choruses. Then ’24 Light-Years’ takes the stage disguised as a calm ballad but it has some underlying heaviness to it, and of course a beautiful chorus.

‘These Black Claws’ is a big banger but it also might be an acquired taste. The famous rapper SHAHMEN makes a brief appearance on this track, and as you’d expect from a rapper, he has a rap section in the second verse. Which at first was kind of surprising and feels a bit out of place but with a couple of listens, it quickly became embedded in the song and didn’t feel unnatural at all. Asger also has a section where he kind of tries a different vocal delivery than he usually does and it’s fantastic.

Up next is ‘Freak’, the first song that wasn’t released as a single and honestly it feels like it should have been on ‘Applause of a Distant Crowd’. Highly melodic and mesmerizing, great vocal hooks and lovely synth layers are all found in this song. At some point in the second verse, Asger says “Your pain is a meme”, which is a bit cringe-worthy and doesn’t really fit the context of the lyrics; this particular line did take me by surprise on my first listen and kind of halted my enjoyment for a bit, but the beauty of the song just takes you back into it immediately, especially with that soothing guitar solo towards the end.

‘Napalm’ starts off with the vocal hook in an ambient way then goes into a heavy riff that has a nice synth melody accompanying it. This song also has a serene chorus that makes me soar and of course more riffs, that 7-string baritone guitar sure does the work, from heavy riffs to melodic licks.

The transition from ‘Napalm’ to ‘Future Bird’ is a bit abrupt and unexpected but it also starts with the hook melody played on synth over chugging guitars; classic! The bass in this record is audible and prominent especially in this song where it drives the main groove. Did someone say divine chorus? VOLA have those in literally every song on this album. This song ends with a tasty riff that is somehow heavy and extremely melodic at the same time.

‘Stone Leader Falling Down’ kicks off with a distant riff with some distinctive effects that are pretty reminiscent of ‘Inmazes’ and the song feels like it’s actually from that album. This is one of the heaviest tracks on ‘Witness’ and yet, somehow, it still manages to be very melodic and catchy.

There’s a very brief moment of silence and then a smooth drum fill by the amazing drummer Adam Janzi that leads us into the next song which is the album closer, ‘Inside Your Fur’. I feel like a broken tape at this point, but the melody, bass, synth… All that you could ask for are found in that song. The synths on this album are insanely well-done and tasteful, they sit right where they should without taking the spotlight from anything else, all while still being audible and enjoyable; Martin Weller is certainly a synth wizard. The high melodic nature of this song and the way the melody repeats until the end really makes it feel like a closer, good way to end the album.

‘Witness’ feels like a mixture between their two previous albums, complex and heavy while still remaining in the melodic and serene world. Overall, it is a highly enjoyable album, very emotional at times and super stank-face inducing at times. It is definitely a grower, especially the tracks that weren’t singles. I really enjoyed the album and I kept repeating it over and over every time it ends. Maybe because it feels so short or maybe because it’s too good (It is both).