Dream Theater at the Eventim Apollo in London 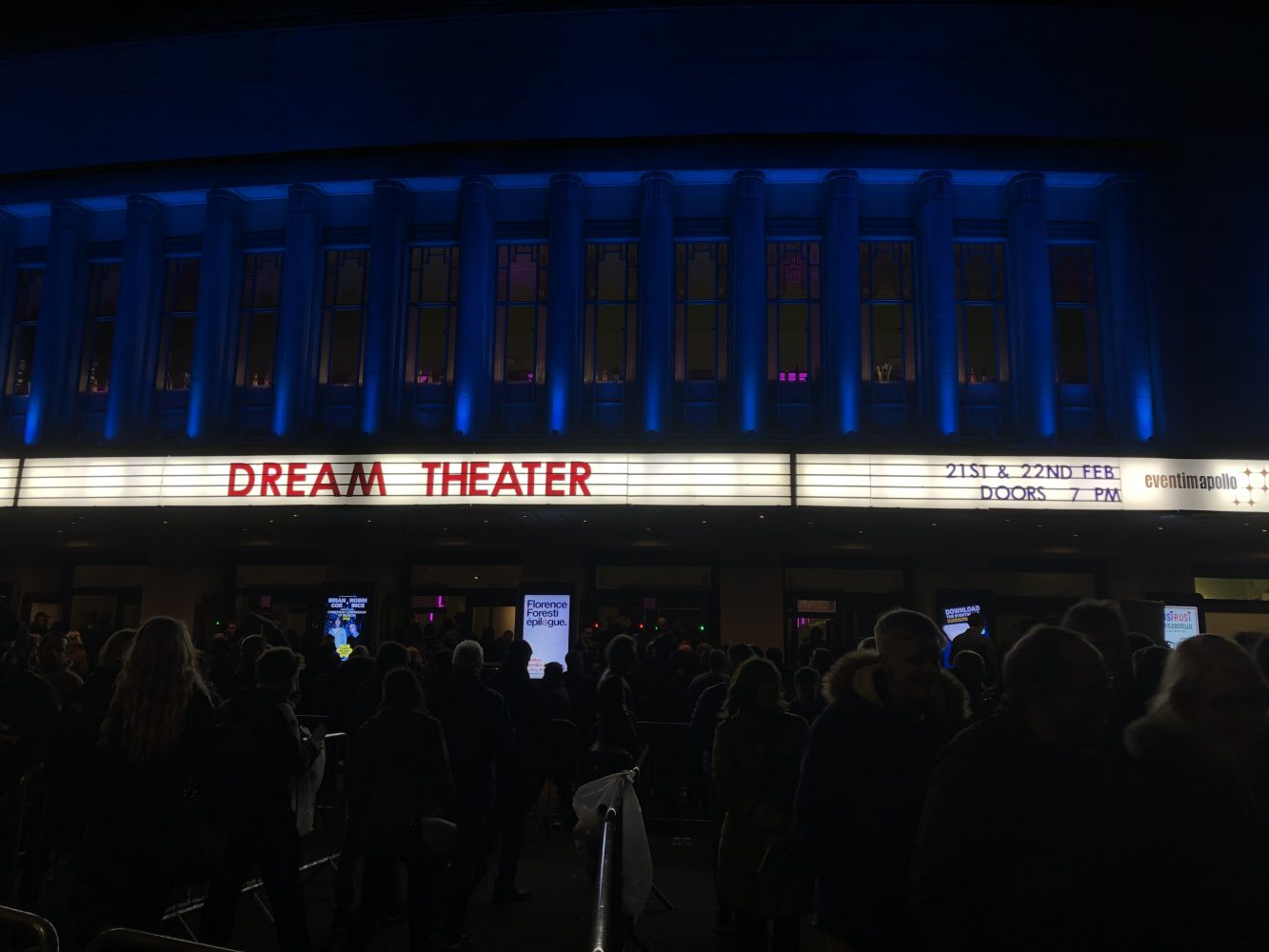 It’s been almost 3 years since Dream Theater last graced our ears live in London, returning once again to play at what seems to have become a recent favourite venue for the band, Hammersmith’s Eventim Apollo. We joined them once more at the entirely seated venue for “An Evening With” prog metal royalty John Petrucci, John Myung, Jordan Rudess, James LaBrie and Mike Mangini.

The night kicked off with ‘Untethered Angel’ off the new (though now a year old, celebrating its birthday on 22nd February) album ‘Distance Over Time’. The only giveaway that the band had been touring for months on end came from LaBrie, from whom the lyrics sounded more like “wunthethered hangel” at points.  However he soon settled into the zone moving through some more of the bands hits in the first half. The riff to ‘A Nightmare To Remember’ let up a huge cheer from the crowd as we moved into the second song. The tension in the Apollo built as the band approached what was previously Mike Portnoy’s rap, but LaBrie nonchalantly sang the lyrics instead as if that was the way it always was. If I’m honest, I did miss the rap.

The band then raced through their next two songs, two more from the new album – ‘Paralysed’ and ‘Barstool Warrior’, with almost an hour of music flying past. The band journeyed towards the end of the first half of the night with another throwback ‘In The Presence of Enemies Pt I’, but notably not part II. Why must we be punished!

The band then said goodbye to the first half of the show with another more recent release, ‘Pale Blue Dot’. Annoyingly, during this last song the on-screen animations were a few seconds behind the band. This went somewhat unnoticed with an image of a desolate town showing for the line “spineless cowards”, but later in the track it showed pictures with religious connotations for the line “dream destroyers”. Not quite as on the ball as you’d want to be for a filmed show!

Throughout the first half, James LaBrie interjected between several songs further showing his fatigue after weeks of touring with a random speech about reading the news, which was met by some cheers and a few “oh no’s”. Let’s see if that makes the final cut for the DVD!

TONIGHT we begin the first of two shows at the legendary @EventimApollo! We are filming 🎬 these shows so tell your friends, grab your last minute tix and come celebrate 20 Years of Scenes From A Memory with us! https://t.co/xQvoKuJE5G

Celebrating the 20th Birthday of Metropolis Pt. 2: Scenes from a Memory, (released October 1999) the band played the album in its entirety. The animations complimented the songs, and were in time with the lyrics (someone must have got a talking to in the interval). The animations in the second set also had nods to recently departed inspirations of the band, notably Neil Peart (Rush), as well as those lost in the less recent past such as Freddie Mercury and Frank Zappa. With the audience singing along anthemically to every song, clapping (when possible) and air guitaring (at the amusement of LaBrie and content of Petrucci), the atmosphere made the story of the band’s very first concept album even more captivating. 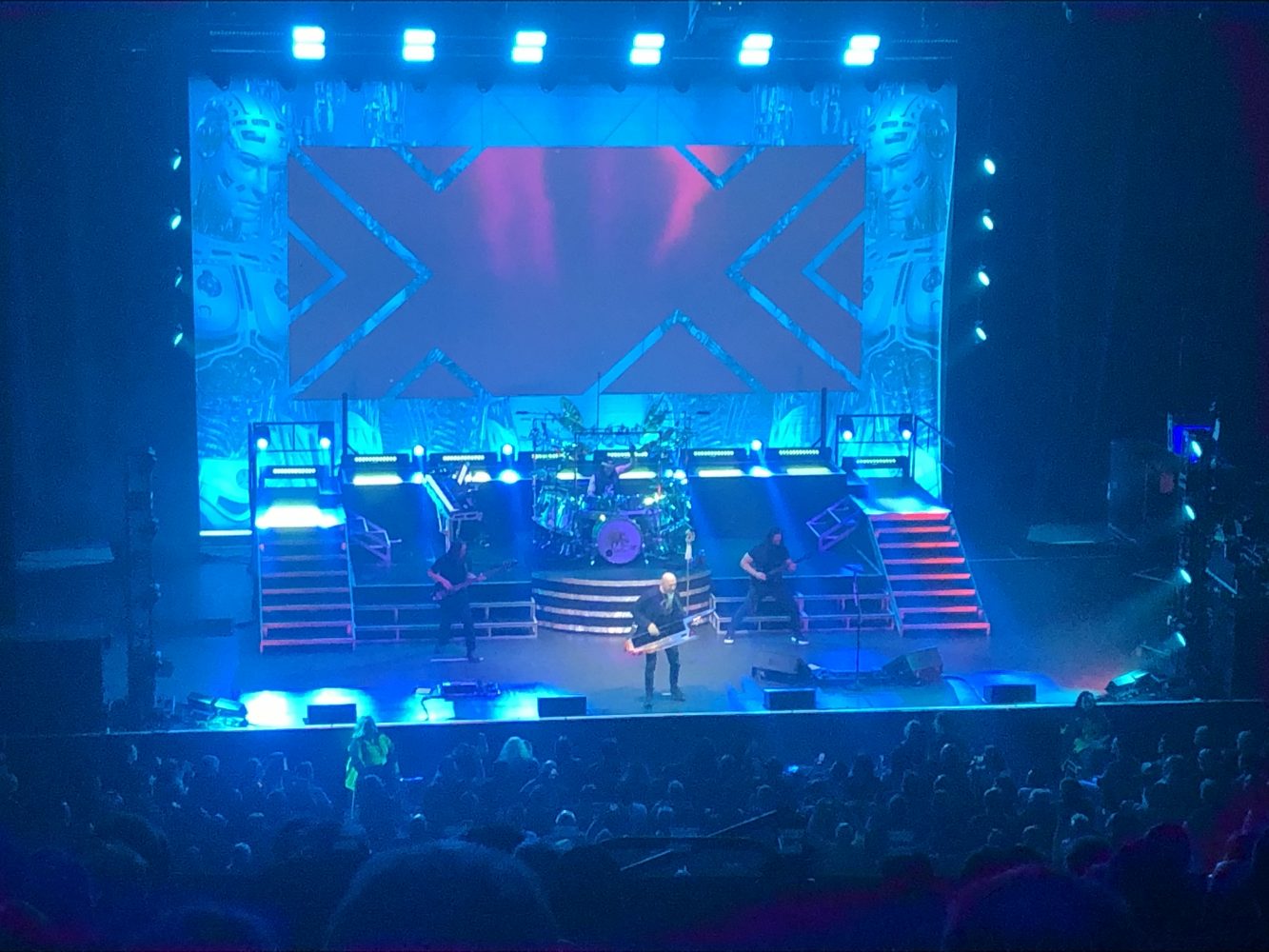 And what would a Dream Theater show be without a bit of showing off? With features of Rudess’s keytar, Myung and Petrucci’s countless moments in the spotlight, and Mangini’s interpretation of the solo at the end of ‘Finally Free’, the band did not disappoint.

After a well deserved, but expected, standing ovation (it would be embarrassing to not have one on a filmed performance though, wouldn’t it?) the band returned to play one final song, ‘At Wits End’. Admittedly, although the ultimate resolve to their previous tease of only playing ‘In The Presence of Enemies Pt I’ would have been to relieve us all by playing pt II, perhaps a 16 minute encore was too big a dream for this theater… Regardless, the audience got back on their feet once more to clap, shout, scream, and wave goodbye to their prog metal idols for another tour.

Regardless of how long the wait, or what what they charge their adoring fans to see them again, (£60 for a hoodie, £60!!!), Dream Theater are confident as ever to keep on touring around the world. I’m sure I’ll be seeing them again soon.