Pain of Salvation at the Lincoln Hall in Chicago 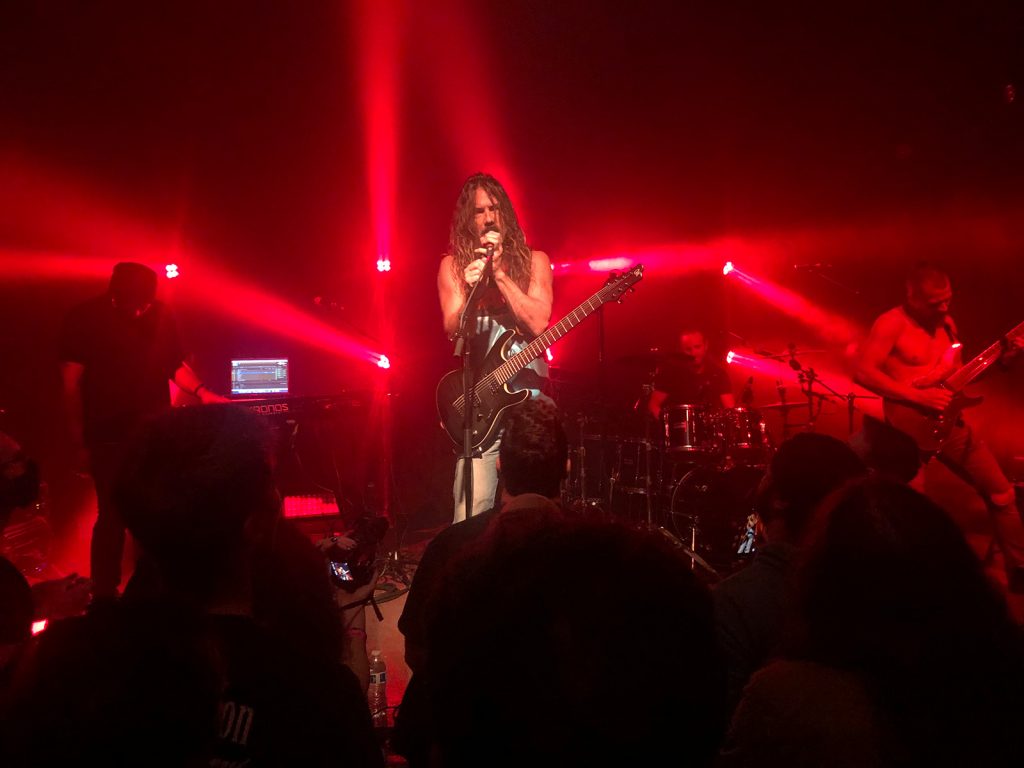 Pain of Salvation on stage as a four piece

There was perfect evening weather in Chicago on Thursday, May 19th that we’d long been anticipating after weeks of fluctuations between extreme cold and hot temperatures.  Along with this nice weather, we’d also been anticipating the return of Pain Of Salvation who last performed in Chicago in 2017. However, there was a problem. Unfortunately, this evening forced the Prog fans of Chicago to choose between seeing Pain Of Salvation, or their Inside Out record label mates Haken who were on tour with Symphony X just a few blocks away at the Park West venue in the same Lincoln Park neighborhood of Chicago. However given you’ve seen the title of the article on this evening, you already know I chose to see Pain Of Salvation.

I made my way to Lincoln Hall for the show. I started off by checking out the merchandise table there and besides the usual t-shirts, posters, and cds, one notable item they were selling was The Pen Of Salvation which was simply a pen that said “Pen Of Salvation” on it. This got a good chuckle from me. From the lobby, I then headed to the stage area where opening act Klone performed.

As Pain Of Salvation took the stage I noticed one similarity between both bands in attendance that night was that they were both without bassists. For Pain Of Salvation, this was because they have not yet replaced Gustaf Hielm, the band’s most recent bassist with whom they parted ways in 2020. There was also a lineup substitution as well for this tour as the band’s regular keyboardist Daniel Karlsson was out on paternity leave. Filling in for him was Silent Skies and Lux Terminus keyboardist Vikram Shankar. The rest of the band was drummer Leo Margarit, and guitarist Johan Hallgren, who have both been with the band for over a decade, and of course founding member and frontman on guitar and vocals Daniel Gildenlow. 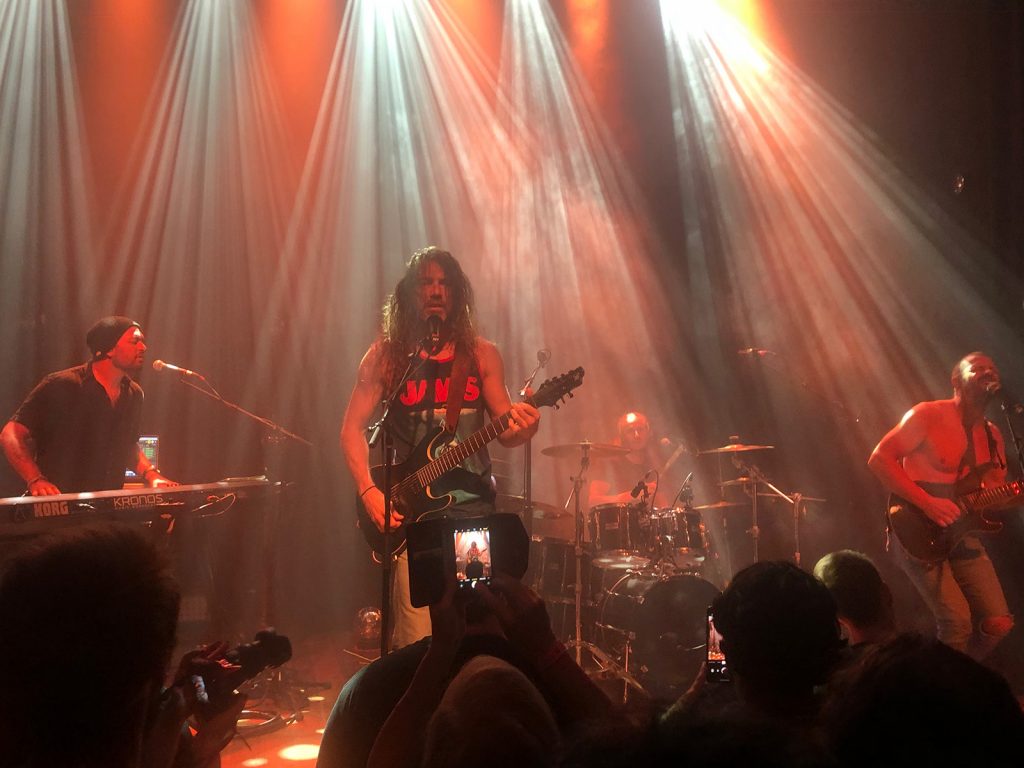 Another shot of the band playing for this Chicago audience

Pain Of Salvation’s set began with performances of ‘Accelerator’, the opening track from their most recent album ‘Panther’ (2020) followed by ‘Reasons’ from ‘In The Passing Light Of Day’ (2017). The entire set was made up of songs from just three of their albums – the third being ‘The Perfect Element, Part 1’ (2000). The reasoning behind these three albums is possibly that it’s their three most recent releases as they came out with a 20th-anniversary version of The Perfect Element in 2020, the same year ‘Panther’ was released. From the first two songs of the evening, it was apparent that they weren’t hindered by the absence of a bassist as the songs still sounded just like their originals. It appeared that they were using a mix of backing bass tracks along with some creative keyboard bass work to fill in that low end.

Some of the musical highlights of the evening for me occurred within the next four songs which began with the performance of ‘Meaningless’. This was the first moment of the evening where Gildenlows vocals were jaw-droppingly powerful in it’s emotional chorus. ‘Wait’ followed, and Shankar did a great job recreating its hypnotic looping piano part, while Hallgren offered up some counter shout vocals during the verse after the first chorus when the full band comes in that isn’t on the song’s original version.

During ‘Used’, Gildenlows vocals shined again with the falsettos and shouts displaying a range that always has him in the running for my favourite voice in Prog. ‘Morning on Earth’ got solid contributions from all band members instrumentally creating the song’s more chilled vibe in contrast to the setlist’s predecessors. The final two songs of the regular set included some highlights from the lighting design during ‘Icon’ with fast-moving colorful strobes emitting through white multi beams during its main riffs.

Lastly ‘On A Tuesday’ included some surprisingly beautiful falsetto vocals from Margarit during the song’s interlude. Up until now, I had always thought it was Gildenlows vocals during that part. For that I extend my sincerest apology to Margarit – along with a follow-up well done!

Though the crowd was a bit sparse it remained loud and rowdy throughout Pain Of Salvation’s entire performance generating an encore full performance of the song ‘The Passing Light Of Day’ which Gildenlow dedicated to his wife. It was the cherry on top of a very powerful evening in the presence of this great band and hopefully with the pandemic subsiding it won’t take another five years for Pain Of Salvation to return again. 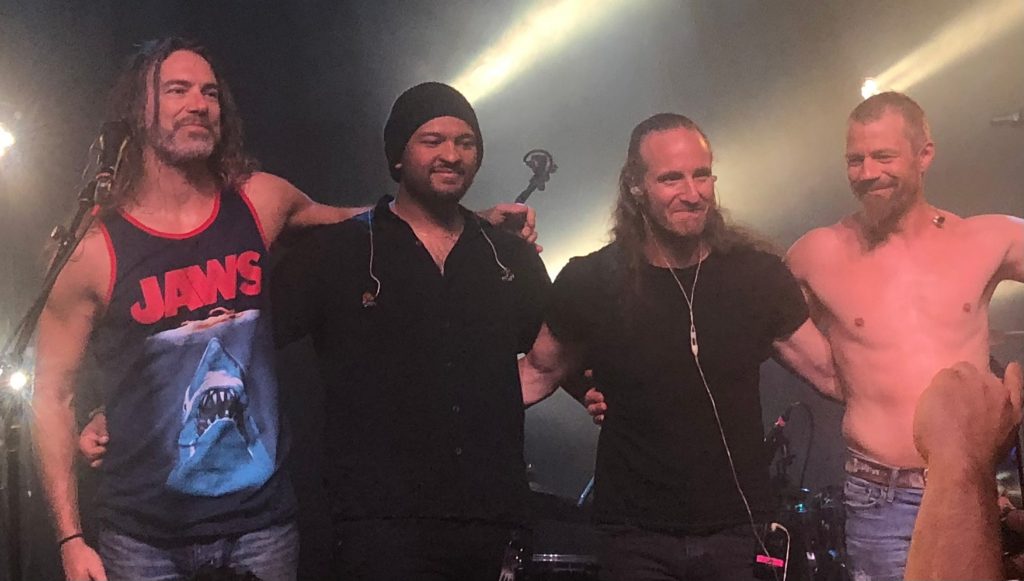