Black Midi taking to the stage

Formed in 2017, the band procured a majority of their fame through the pandemic era. And now with two albums under their belt, and another one lined up to be released next month – Black Midi are the hot new act that everyone’s talking about, and I had to get in on the action. After a number of recommendations from friends that I check out Black Midi, I finally took the plunge, binged on their albums, and picked up a ticket to see them in Kreuzberg. And I wasn’t entirely sure what to expect… but I certainly got more than I bargained for.

But before I go on about their performance, I have to talk about the support band.

They were called ‘O’, just the letter ‘O’. Terrible idea for SEO, but certainly short and sweet for this act with no studio releases behind them. O consists of Tash Keary on drums, and Joe Henwood on baritone sax. And despite being just two musicians, they managed to sound huge, filling all areas of the frequency spectrum, to a spectacular light show bringing their instrumental jazzy shoegaze to this fresh audience.

Joe had his saxophone plugged through an assortment of pedals creating thick textures combining together distortion and modulation effects. Tash accompanied with some killer drum beats that sounded inspired heavily by EDM.

I don’t have much more to say about them, but I’ll drop a link to their Instagram so you can check out some of their clips for yourself – and maybe catch them when they get into the studio which was on the night was promised to be “soon”…

Black Midi were up on stage next. The lights came down and the members walked on stage one by one with swagger, to a very grand and over-the-top introduction track – which I loved for how corny it was. They picked up their instruments and started their set all guns blazing… Except the band ran into a whole assortment of technical issues.

Kaidi Akinnibi’s saxophone mouthpiece appeared to be wobbling dramatically to the point where the stage tech repeatedly came onto the stage to try and repair it with copious amounts of duct tape. Cameron Picton also had to have a bass string change, but somehow managed to keep on playing basslines with his remaining strings by approaching the neck from above, while the tech changed the string underneath.

And there wasn’t a dip in the sound. The ensemble kept it together, and the crowd kept going absolutely mental for the wall of noise that they were producing whilst playing ‘953’. I was genuinely stunned at how everyone kept it together, kept playing, and didn’t miss a beat or try to start the track again. It was like watching a ‘Two Ronnies’ sketch, but without the humour. Just absolute professionalism and continuity.

And if that wasn’t impressive enough, the music was absurd too. 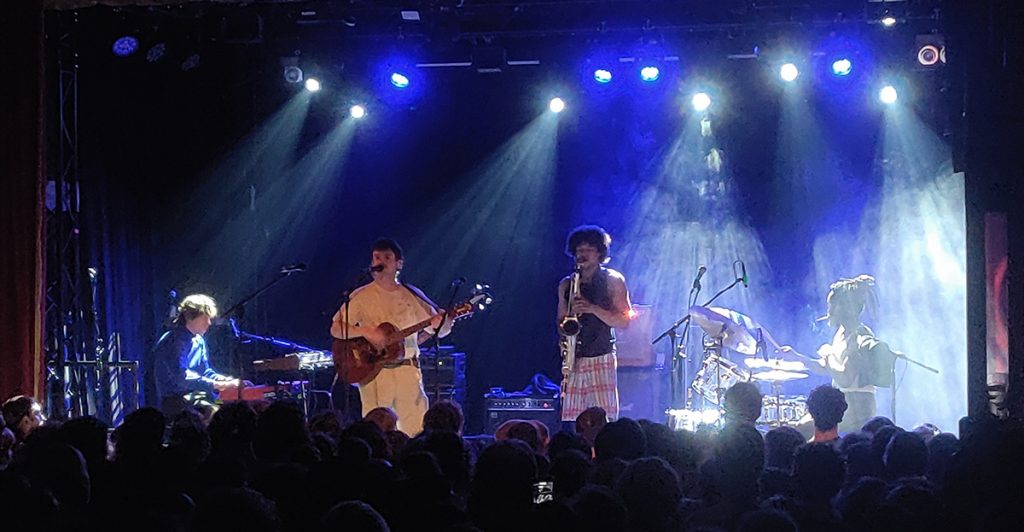 Now because I’m not hugely familiar with their discography, I did struggle a bit to differentiate when one song ended and the next one started, but I did appreciate how clever it was that almost every song blended into one another. The vibes were constant, and never stopped coming. If I had to sum up their sound, I’d have to make a comparison to King Crimson, but with modern-day arrangements and production values that really err on the avant and noise rock genres.

Morgan Simpson was on drums, and he was illegally good. So good in fact that he won the ‘Young Drummer of the Year’ award in 2014. He’s certainly put his chops to good use since that competition, hitting hard a fast with a cool factor surrounding his playing style. And not just because he was smoking whilst laying down his groovy rhythms.

Geordie Greep (Bass) and Cameron Picton (Guitars) also have great vocals, and when combined compliment each other very well as the two timbres don’t clash without the realms of Black Midi’s compositions.

Running through all areas of their discography, I was idling thinking to myself “What this show needs as a breakdown into the 1984 banger Axel F by Harold Faltermeyer”, and surprisingly enough that’s exactly what happened next. As a young act, they may have been more influenced by the Crazy Frog years of this song, but quite frankly what else can I say. There’s nothing cooler than a mid-set breakdown into Axel F. 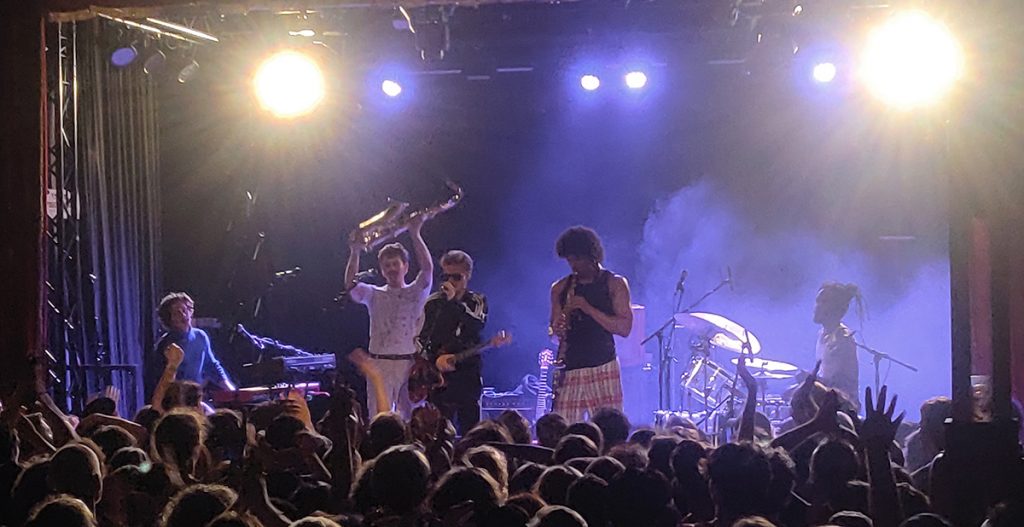 Cameron holding up the Tenor Saxophone in memorium

And then obviously almost immediately after this, a funeral service happened for the broken tenor saxophone. I genuinely wondered what on earth was happening at this point from how eclectic these series of events were, but I was kept mesmerised by the swagger and artistry of this live show. It was so much more than just musicians playing their instruments on a stage, it was a show by all meanings of the word. And one I won’t forget in a hurry!

Kaidi came back to finish the rest of the set on soprano sax. I did miss the beefy low end, but the crispy sax melodies still blended in perfectly into the bizarre textures of the music, as the bass pummelled the low end through the sound system. The audience didn’t seem to mind either as the mosh pit grew bigger and bigger as the evening peaked with the final few songs.

This band are on the cusp of being absolutely huge, not that they don’t already have a very reasonable following from their recent albums successes. I shall be looking forward to the release of ‘Hellfire’ on July 15th, and hopefully catching them on tour again in the future. And if you get the chance? Do not turn the opportunity down.