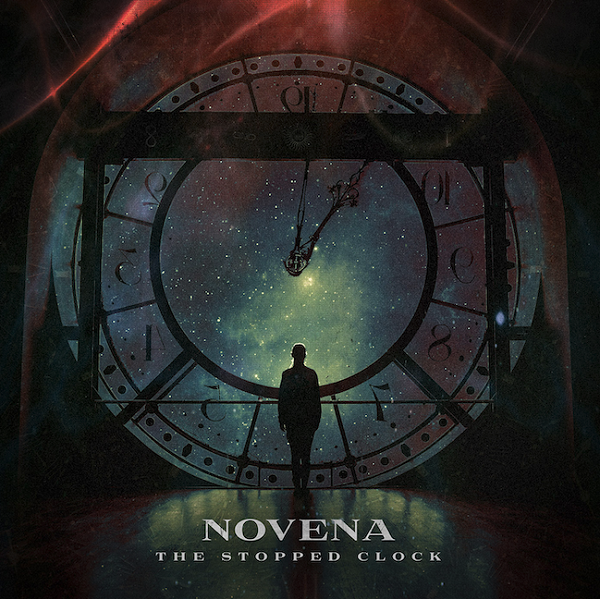 The album art for ‘The Stopped Clock’

Novena have released a new EP entitled ‘The Stopped Clock’, continuing some of the lore of their debut album ‘Eleventh Hour’. If you’ve not heard of Novena before, I’d highly recommend checking out that record out first before indulging yourself in this one as ‘The Stopped Clock’ effectively acts as a set of bonus tracks, as well as being a prologue and epilogue for ‘Eleventh Hour’.

The first track ‘The Stopped Clock’ has no right to be as good as it is, and I think one of the band’s best written songs to date. It has everything inside of it, from Gareth Mason serenading us with their deeply personal spoken word, to clever harmonies and a catchy chorus  to make this single track incredibly memorable.

I’m a big fan of the little counter licks that appear beneath Ross Jennings’ voice inside the verses of this track. His vocals on this EP aren’t to be underestimated, really showcasing some of his variety in his pipes with his lead and more ambient styles of approaching singing.

And in case you didn’t notice, the fade-in intro carries directly on from ‘Prison Walls’, and the outro leads directly into ’22:58′ – the closing and leading tracks from ‘Eleventh Hour’, cementing the album’s lore in an eternal time-loop of prog.

The Stopped Clock as an EP is a reflection on the time we’ve all spent in stasis during the events of the past two years. As an epilogue to ‘Eleventh Hour,’ the title track completes the clock cycle, revisiting themes and motifs from the album, and ruminating what it means to love, be loved, to live, and to have lived.

Gareth Mason comes into their own in the second track which is a cover of the famous track ‘Bury a Friend’ by Billie Eilish. The music explodes out into riffy goodness as the song slowly lifts away from being true to the original, and turning into a far darker metal interpretation of this widely loved track.

Now, I am a big fan of the original track, as well as Billie’s vocal pipes, but Gareth’s vocal interpretation here is phenomenal – cementing them as one of the finest vocalists in the modern-day prog metal scene. And I think I might prefer this version to the original…

Then we move onto the last track ‘In Loving Memory’, which represents something very personal for some members of the band. Harrison White had this to say…

The final track, ‘In Loving Memory,’ is dedicated to a dear friend of the band, Daren Martin, who left this world a few years ago. He was a furiously intelligent, brilliantly funny, and boundlessly generous man who we miss dearly. Whilst it is so deeply personal to me, and us, as writers, I also invite listeners to think of someone special when they listen. Loss is something that unites us all. With love in our hearts, and the memory of those who’ve passed clear in our minds, perhaps together we’ll fly.

For me personally, this track has became a moment for reflection on those I’ve lost, and in the wake of the coronavirus pandemic – the wider loss of life throughout the world in which we live. I particularly took attachment to the repeated piano lick that continues throughout the track until the end to almost be a representation of the ongoing turmoil that is eternal time which I think works very well as a compositional technique to have the song based around this.

Overall, I really love this EP. And as always, I’m excited to see where Novena take us next not only musically, but spiritually too.

Whilst this release isn’t available in a physical format, you can still support the band by buying ‘Eleventh Hour’ on vinyl