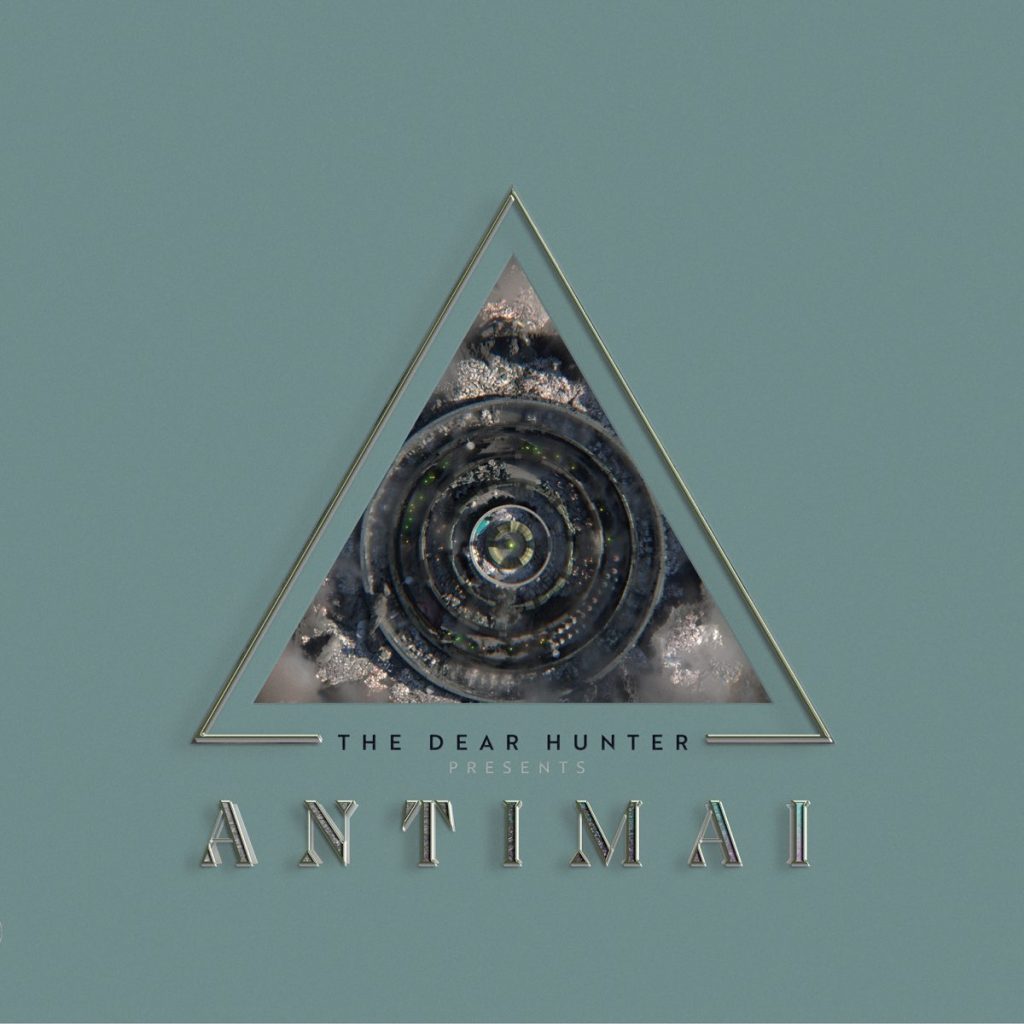 The album cover for ‘Antimai’

The Dear Hunter welcomes you to the city of Antimai. It may be the only remaining city in an apocalyptic world. Eight rings gentrify its inhabitants. Ring eight, furthest from the Tower, houses the poverty-stricken; Ring one, the Tower itself, hides the God Emperor XCV: power incarnate.

Most known for the five album Acts following the story of a Boy, The Dear Hunter have put the final Act on hold to introduce us to Antimai. The Acts developed The Dear Hunter’s basic sound: big, orchestral rock with beautiful vocal harmonies. This new album cycle retains that iconic foundation and adds Caribbean rhythms, funk and R&B sounds, and even bigger choruses. The spirit of rock is present in the conceptual approach to album writing and in many of the drumbeats. Guitar riffs step back and horn lines step forward in the city of Antimai, but rest assured: this is still The Dear Hunter, and they still rock.

The first taste of this new sci-fi world was last year’s short album ‘The Indigo Child.’ ‘Antimai’ fleshes out the world of The Indigo Child by peering into each of the eight rings that compose the city. It’s not a pretty glance. Imagined as the endgame of capitalism, Antimai is a city fringed by the destitute who live in total misery and long for just a glimpse of the God Emperor. The worldly power of the God Emperor XCV, however, is not where the destitute place their hope. Ultimately, their faith is in The Indigo Child, who has promised to save them from hardship.

Ring seven is full of castaways. They are not necessarily living below the poverty line, but society has cast out anyone who does not fit the mould, and ring seven is certainly no picnic. Many ‘refugees,’ as the castaways are called, come from Ring five, the middle-class ring. Ring six, called LoTown, is the agricultural ring. Antimai suffers from a lack of both sun and rain, which makes growing enough food for the entire city rather difficult. The whole city relies on ring six, but leaves them to figure out how to meet the quota. Under cheerful, melodic horns, a jagged, synthy bassline threatens. It’s a hard life, but LoTown is the first ring that is integrated with the rest of Antimai.

Is the middle class the worst of the best, or the best of the worst? Ring five’s inhabitants wrestle with that pregnant question as they find their worth through the only way Antimai will allow: procreation. The middle class must “turn one and one to three,” or become a refugee – exactly who they are taught to fear. (Anyone incapable of procreation becomes a refugee, doomed to live in ring seven.) Ring five is the first ring able to live in some luxury, as indicated by the tempo shift halfway through to jazzy wallpaper music one might find in an upscale establishment.

Ring four’s members are the cops: the middle class with a dash of power. This is ring five’s primary way up the social ladder. The Patrol are beaten down by the autocrats. In turn, they oppress the lower rings. If they fail to keep the masses cowed, they face severe consequences. This is their curse: kill their conscience and oppress the very people they came from or face capital punishment.

The lifestyles of the rich and famous can be found in the third ring, if ring four will let you in. Ring three is composed of the religious advisors, legislators, and judicators of Antimai. Tasked with jobs like keeping “the flow of food to hungry mouths,” they are more concerned with keeping the flow of cash to their own already stuffed pockets. They are philosophers, but their wisdom revolves around themselves: if someone must be rich, it might as well be them. Antimai’s leaders have no qualms using their power to keep themselves in power and in wealth. As they put it, “Pay no attention which way the wind blows / ‘Cause we can weather anything.”

Thus far on the journey through Antimai, all the rings have housed human inhabitants. Ring two is the only section that houses anything green, and ‘green’ is a stretch for the nature that lives there. The remnants of the natural world are mostly carnivorous and predatory plants. Nature, being all the way up in ring two, naturally lends itself to status displays. Ring three inhabitants stole enough decorative status symbols long ago that nature sealed itself off from the rest of the city, creating a nigh-impenetrable moat between the God Emperor XCV and the rest of Antimai.

Antimai’s power comes from Tower, the seat of the God Emperor. Ring three may seem strong; it is but a sliver of XCV’s absolute power. But is he human? During XCV’s speaking portions, his singing is doubled by a robotic vocoder. Future albums may shed light on the substance of XCV; for now, he is power incarnate: “Me on a bad day, you in a bad way / And without a warning, I’ll put you in mourning.” There’s no need for diplomacy if the words you speak become reality, radiating throughout all seven other rings of Antimai. Against such power, will The Indigo Child be able to fulfill her promise?

Behold: Antimai. From the slums of ring eight to the golden glory of XCV’s Tower, The Dear Hunter have given us a bird’s-eye view of each ring’s hopes and fears. Questions remain: Who is the Indigo Child? How did the City get this way, and will it remain so? Is the God Emperor even human; if not, what is he? Only future albums will tell; I eagerly await the answers.