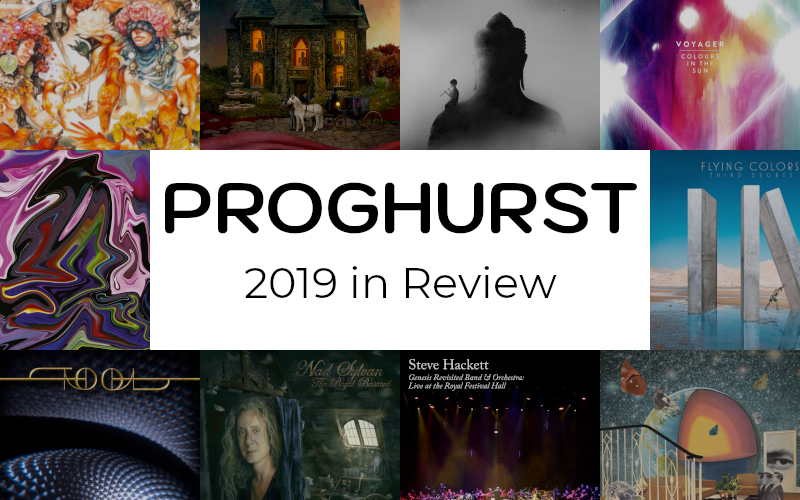 Hello there and welcome to the second, and final part of my 2019 in review. As with the previous article, these albums are listed in order of release date as opposed to preference. I found choosing a favourite record of the year very difficult, as I’m sure many of us did.

Gold & Grey was a bit disappointing for me as I thoroughly enjoyed ‘Purple’, their previous record. I love the heavier crunchier sounds of this band, and this album fell a bit flat in places, divulging into short tracks that feel a bit unfinished due to their length. There are some belters here like ‘Front Toward Enemy’ and ‘Tourniquet’, but I don’t think I’ll be coming back to listen to this album all too often which is a shame.

Comprised of a handful of music graduates, Thank You Scientist have a small following but put out three amazing albums. ‘Terraformer’ is full on jazz prog-rock fusion with trumpet and saxophone taking centre stage throughout the album. Even after a big lineup change with three band members leaving in-between the last record and this one, they’ve still come through with a really tight record. Dare I even say it, their best one yet.

This is the final record in a trilogy of albums about telling the story of a vampirate. Nad continues on with familiar themes, instrumentation, and motifs from the previous two records and creates a satisfying conclusion. I really like Nad’s vocals, and he’s proven with these records that he’s got the songwriting skills to match his pipes.

I’m sad to say that the latest Tool album didn’t do all too much for me, but that’s possibly because I’m not a huge fan of the band in general. I really love Maynard James Keenan’s vocals, especially with his other band A Perfect Circle, but this Tool record felt a bit stale. The title track ‘Fear Inoculum’, ‘Descending’, and ‘7empest’ are really great, and I can imagine would be insane to hear live

I’d also like to slot in here that the CD edition of this album was well over £60 in the UK which is pretty absurdly expensive. Quite frankly if this album wasn’t on Spotify, there’s no way I would have bothered listening to it.

The first Opeth album to be released in Swedish as well as English, ‘In Cauda Venenum’ broke a dry streak in Opeth’s recent releases. Since Mikael Åkerfeldt shifted away from harsh vocals in 2008, the Opeth sound has changed drastically from the late 90s. I wasn’t a huge fan of ‘Sorceress’, but ‘In Cauda Venenum’ brought back home my love of this band. The album is powerful throughout, not just at the start which was my issue with ‘Sorceress’.

In Cauda Venenum by Opeth CD

Voyager – Colours in the Sun

There are some really fun tracks on this record which is what I’d expect from Voyager. Dramatic synth-pop djent is the best way I find to describe this band. I loved ‘Colours’ and ‘Brightstar’, as well as ‘Entropy’ which featured Einar Solberg of Leprous. A collaboration so bold that not even Ozzy Osbourne’s collaborations with Elton John and Post Malone can compete with it.

But seriously… Ozzy what on earth is going on there?

If you didn’t catch our review last year, it was one of praise for Leprous’ ‘Pitfalls’. It’s a very emotive album that takes has a lot of dramatic passages and build ups. It’s not the Leprous album for everyone, but they have progressed their sound forward and stayed at the top of their game for this 2019 release.

This is my first experience of a Flying Colors album and I’m really glad it was this album. I loved the opening track ‘The Loss Inside’ which doesn’t mess around by getting straight into heavy guitar riffs and organ fills before you can even take your finger off the play button. ‘Crawl’ was also another big highlight for me. Much of the album was uplifting and upbeat, in a very Neal Morse and Mike Portnoy style.

Bent Knee – You Know What They Mean

I came across Bent Knee when they were supporting Haken on their European tour for Vector earlier this year. I was a little confused after their performance, and I had the same reaction initially with ‘You Know What They Mean’. I wasn’t really sure what I’d just listened to, but I knew I wanted more.

This album is a bonkers and untraditional, and I really enjoy listening to it. Favourite tracks include ‘Give Us the Gold’, ‘Cradle of Rocks’, ‘Lovemenot’, ‘Lansing’ and… Oh okay, I love all of it!

I originally struggled myself during the live orchestral shows in 2018 (when this album was recorded) to properly hear what was going on with the Heart Of England Orchestra. As is typical in a live set up with electric and acoustic instruments munged together, the acoustic instruments can very quickly get drowned by just a simple rhythm guitar line. For those that aren’t familiar with Genesis’ work, the orchestral arrangements were added on later by Steve himself (probably in tandem with Rodger King).

However, the mixing on this has been done surprisingly well on this final published releaes. The orchestra is well balanced, and you can easily hear the flourishes that have been written in especially for this tour. Overall, a really satisfying refreshment of some classic Genesis tunes, as well as items from Steve’s solo discography.