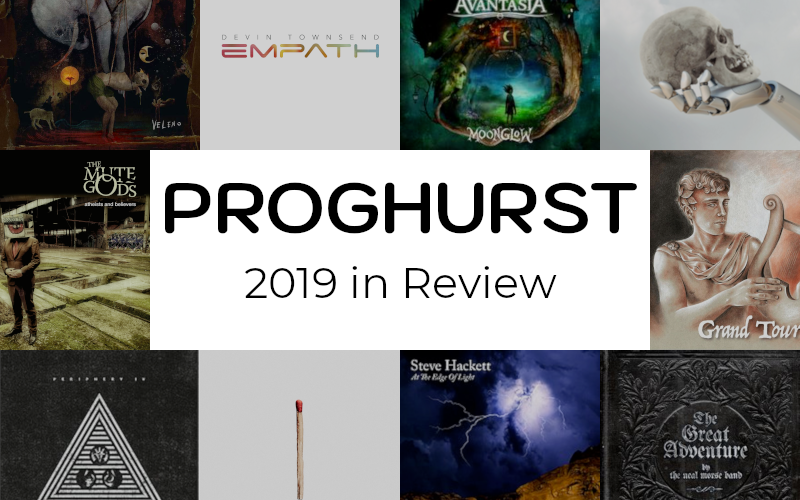 To finish off the year, I thought I’d collate the various albums I’ve picked up that were released in 2019. Some I’ve previously done full reviews of, others I’ve just been listening to in the background that I’ve been enjoying myself.

I didn’t want to do a “Top 10” list as I find doing a direct comparison of art in that way to be incredibly challenging. The order below is simply in the order in which the albums were released throughout the year, accompanied by a short summation of my thoughts.

There are a total of 20 albums I’ve picked out, so I’ve decided to divide this up into two posts. The second of which will be out later this week.

Steve Hackett – At The Edge of Light

Each time Steve releases an album, I always  look to spot the growth inside his writing skills. This album builds on his previous two releases ‘Wolflight’, and ‘The Night Siren’. Lots of familiar themes and instrumentation can be heard if you are already used to his discography.

A whole assortment of musicians have contributed to the album too, notably Jonas Reingold who has joined Hackett’s touring band after the departure of Nick Beggs. Some songs fall a bit flat for me, but there are some wonderfully somber moments on this album, as well as plenty of dramatics.

I thoroughly enjoyed ‘The Great Adventure’. It’s my first Neal Morse Band album, and I’m glad I picked it. Historically I’ve been used to Neal’s sound from the early stages of Spock’s Beard. Some really well crafted themes and stories inside the record. I was never left wanting more. A very satisfying listen on the whole, although I am now aware I need to pick up ‘Similitude of a Dream’ as I’ve heard that’s a belter.

The Great Adventure by The Neal Morse Band CD

An enjoyable album, but nothing surprised me too much. The musicianship is superb as usual, and Tobias chose a great set of guests to star on this record. I also enjoyed seeing Avantasia perform live early on in the year which was a real treat. If you have enjoyed previous Avantasia albums, you’ll enjoy this one. Progressive power metal at its finest.

Dream Theater came back to their roots with this record after the mess that was ‘The Astonishing’. While there wasn’t an ‘Octavarium’ level epic on this album, there are still some great tracks on this record. If you’ve craving some more Dream Theater, then I’d recommend picking this up. There’s lots of fun, wistful keyboard solos, virtuosic guitar playing, but unfortunately there’s nothing groundbreaking on this record which is a shame to say. Dream Theater have done so much already that it’s incredibly hard to keep building on their previous work.

The Mute Gods – Atheists and Believers

You may have never heard of them, but you’ve almost certainly heard the individual band members playing before. They are Nick Beggs (Kajagoogoo, Steven Wilson, Steve Hackett), Rodger King (Steve Hackett), and Marco Minnemann (Steven Wilson, Joe Satriani, The Aristocrats, and more).

The three piece is led by Nick, and as far as we know this is the last album to be released under this project. I’ve enjoyed the mysterious creative direction these records have taken, especially knowing it’s being driven by a character as peculiar as Nick. His involvement in anything always leads to something a bit weird and goofy (in a good way). It’s a good finisher to the trilogy of albums, and I frequently found myself coming back to it throughout the year.

Wow. I was really really blown away by ‘Empath’. This ended up being my most listened to new release of 2019 across the entire year. I kept coming back to it, and have turned into a bit of a Devin fangirl, attending his documentary launch party in London earlier this year, as well as seeing him on Volume 1 of his Empath tour twice!

The record is completely bonkers in a very Devin way of approaching music. It features three different drummers, a choir, an orchestra, and all sorts of other talented musicians that brought their sounds to this album. As with every Devin record, it’s definitely not to everyone’s tastes, however I’d highly recommend giving this a go if you haven’t already.

When I first got around to listening to ‘HAIL STAN’ this year, the first track was such a journey I had to take a pause before continuing on with the album. At nearly 17 minutes long, there is endless brilliance in the melodic writing, the vocals, the djenty guitars, and pretty much everything else.

The album continues after this with some incredibly tight riffs and solos. I’m not overly familiar with their wider discography aside from their debut album released in 2010 so this was a real slap in the face for me. If you’re into the heavier side of the progressive music scene, it’s a must listen from 2019.

This is my first Big Big Train album, and I actually only got hold of it this week. The band have been on my radar for a while, and I’m glad I finally gave them a go. I’m a sucker for some mellotron, as well as the more classic prog rock sounds from the 70s which they deliver on. I’m looking forward to listening more to their music sooner rather than later.

10 years since their last studio release, Rammstein release a self-titled album. On the whole I enjoyed this record. Lots of catchy tunes like ‘Deustchland’, ‘Radio’, and ‘Ausländer’ that had riffs that got engrained into my mind.

It’s not secret that I’m a huge fan of this band, and this record checked all the boxes for me. Their live show in Vienna was ridiculously insane with huge pyrotechnics, fireworks, and special effects. While the band may have grown older, the musical spirit has stayed the same.

I’ve particularly enjoyed ‘Veleno’ this year. I didn’t think an album could take the cake from their prior release ‘King’, but this record has surely done it. The technicality is taken to another level with even deeper levels of instrumentation combing their way through the mix. The orchestration, operatic singing, as well as aggressive vocals were fine tuned to perfection. You can read more about my thoughts on this album (I have a lot of them) in the full review we published earlier this year.