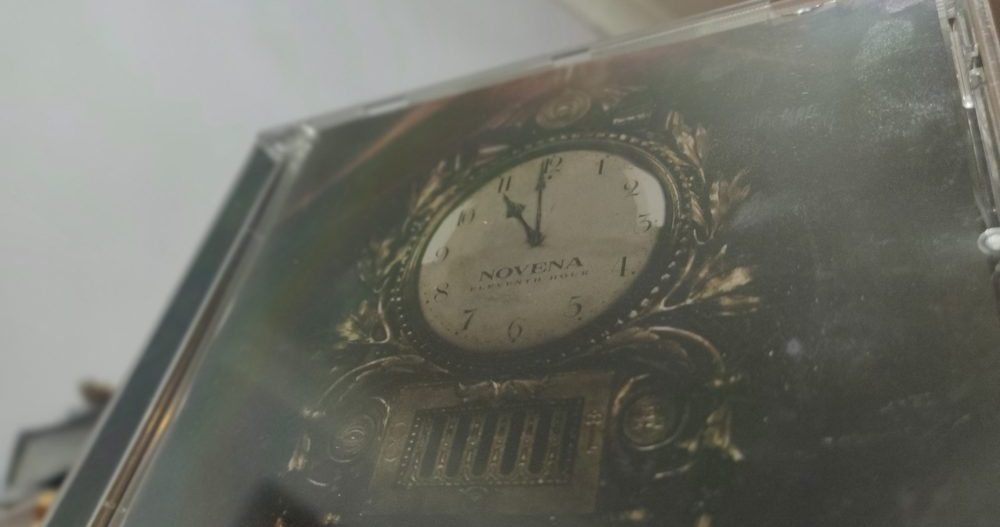 Novena have finally released their highly anticipated debut album ‘Eleventh Hour’. This is their second release after their first EP ‘Secondary Genesis’ which came out in 2016. The band originally spawned from another band called ‘Bleeding Oath’ featuring Moat and Harrison. Novena are…

The album starts with ‘2258’ in a similar way to Anathema’s ‘The Optimist’. A short ambient track to warm the listener into the full album with muffled snippets of what is to come.

As the clock ticks on, we move into ‘2259’ which features upbeat groves weaving between Ross’ clean vocal lines, and Gareth’s harsh vocals. The track knows exactly when to build up and when to pull away to create tension. When the final breakdown in the track hits, it’s impossible not to start jamming along to the melody. Novena do a great job of contrasting heavy instrumentals with light vocals in the major key to build an upbeat atmosphere.

‘Sun Dance’ was the third single released for this album and was accompanied by a music video of ballet dancing. Even though this is a shorter track, it’s still packed full of compositional variety, energy, and cheeky licks and hooks in the bass. The pre-chorus breakdown instantly makes you want to stand up and dance.

‘Sail Away’ is the first sprinkling we get of Gareth’s spoken word in this album, very reminiscent for me of Caligula’s Horse. The song transforms into a soft emotional ballad with Ross singing to us accompanied by a gentle piano to the words of “Sail away… Sail away…”

Every time the backing vocals come in and fill my ears with the words ‘Lucidity’, I feel an immense amount of pleasure. This next track on the record has an excellent structure to it, and is ridiculously impressive in isolation. Similar to the hype around ‘Reptile’ by Periphery in 2019, you almost have to take a break after hearing the song before you can continue with the rest of the album. There’s so much to digest, which is wonderful for a progressive music fan like myself.

The vocals blending on this record is very satisfying, with four very different styles found throughout the music. They all overlap and intertwine with each other to create complex melodies that flow into you ears like a hot chocolate on a cold winters night.

‘Corazón’ contains all sorts of thick vocal layers, reminiscent of Gentle Giant who pioneered the technique for this genre. Later on, a six part clapping polyrhythm breaks up that track that was recorded around a single microphone. This may be my favourite song from the album because of the wide number of musical influences that can be picked out. Also, the use of Spanish lyrics give the track a fresh twist as it’s a language I haven’t personally indulged myself in when it comes to singers.

“In the whole 5 minutes of ‘Indestructible’, There are no two chords in the same key that follow each other. Except for the plagal cadence ad the end of the chorus. Every. Single. Chord. Change. Is. A. Key. Change. Or. Tonicisation.”

If that isn’t peak prog, I don’t know what else is. I’m impressed that with all of that harmonic change, there is still a constant melody line floating above it that is recognisable as the song moves forward.

One smooth transition later and we get to bury ourselves in ‘The Tyrant’. One of the heavier tracks on the album where Gareth’s harsh vocals feature prominently. The vocal stabs shared between Ross and Gareth float wonderfully above the instrumentals. The track fades out with some bit-crushing goodness. It’s an effect I always personally pander away from, but it works so incredibly well here as way to end the track.

‘Prison Walls’ is a highlight of the album for me. At just over 15 minutes long, it takes you on a hugely emotional journey. Full of blast beats, evil laughter, power chords, vocal rounds, a soft piano section, strings, and so much more. Gareth’s spoken word monologue is an emotionally intense journey that I wasn’t ready for the first time I heard it. I shall’t spoil the details here, you’ll have to go and listen for yourself. Novena wanted to show us what they were capable of with this track, and as it turns out it is a great amount.

I can’t want to see where they go next, and what lies in the future for this band.