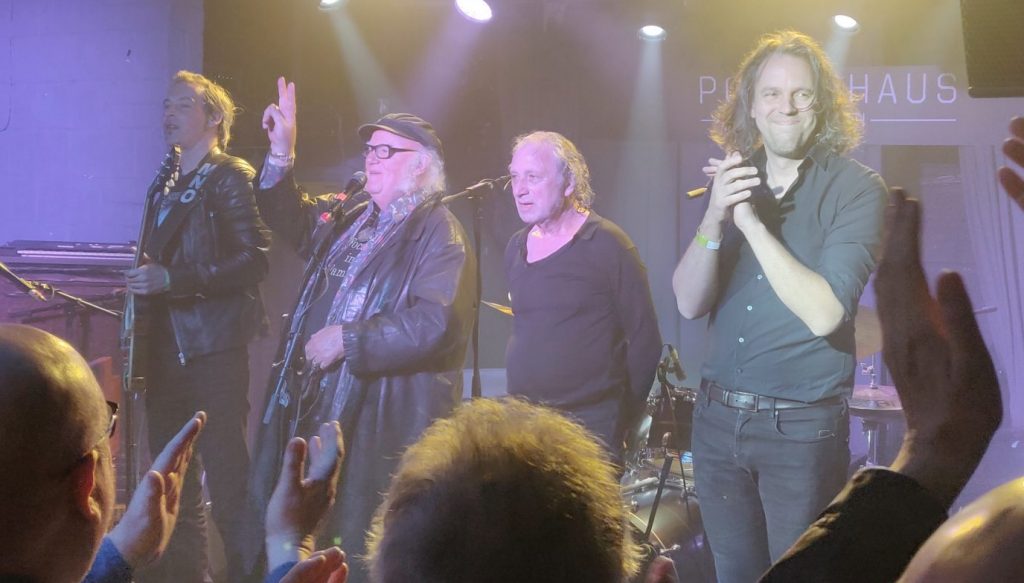 The band saying their thanks at the end of the set

Whilst I only know a handful of the hits, Focus has been a band that’s captivated me since the moment I first heard them. And yes, it was that song. ‘Hocus Pocus’ made it into the soundtrack of ‘Baby Driver’, a film from Edgar Wright that came out a handful of years ago. Everything about the soundtrack for that film is fantastic, and I found some great artists from it too (The Damned, The Jon Spencer Blues Explosion, Incredible Bongo Band, and more…) – but the prog highlight was clearly Focus – and that’s what’s brought me back to ‘Under the Bridge’ today…

… Oh wait no sorry, and that’s what brought me to the ‘Camden Powerhaus’ (Dingwalls anyone?) – because the venue ‘Under the Bridge’ is currently unable to operate due to sanctions against Russian oligarchs. What a world, what a world.

Now I find it’s always a risk seeing ‘older’ bands live. I’ve been burnt in the past on this with somewhat disappointing performances from bands and artists that started their careers in the 60s and 70s, but Focus are absolutely still going strong! With member and leader Thijs van Leer accompanied by drummer Pierre van der Linden, the historical members were out in full force.

Claire and Oliver serenading the audience

First up was Claire Hamill who kicked off the evening with some folky tunes in her back catalog. I wasn’t familiar with her repertoire, but all songs very quaint with great moments of clever lyrical storytelling.

Accompanying her was Oliver Day on acoustic and lap steel guitar. The two of them have been a part of the Yes tribute band ‘Fragile’ for many years, and Oliver even performed us a solo rendition of ‘Mood for a Day’ which was performed immaculately.

A quick run to the bar, and then Focus were up on stage, getting eased into the venue with a bit of heckling from the crowd – of course. Thijs whipped out his flute for a cheeky solo and we were on our way into the evening.

The stage setup was glorious, with a full Hammond organ and Leslie speaker

The band played a good spread of material from all over their discography, successfully covering most eras. What struck me straight away was that the band were tight and well-rehearsed. The majority of performed songs in the evening were long, and with no backing click to keep them in time, and it was up to the musicians themselves to keep things going. And they stuck through it, tempo change, after key change, after guitar solo.

There were plenty of opportunities throughout the set for the various members of the band to show showcase themselves, winding in and around the tracks of the evening. For me, I’d compare some of the styles of the longer tracks they chose to play as to being closer to jazz jams on top of shorter existing compositions, rather than explicitly structured short work of music – although that’s possibly because I’m not very familiar with the studio versions. Not yet anyway…

The band did a rendition of ‘Moving Waves’, the title track of the album – and turned it into a full band arrangement – supposedly for the first time. “If there are any mistakes, don’t blame us” – Thijs said before launching into this mellower song.

They also played ‘Brother’ – dedicated to Bert Ruiter, a former bass player of the band whomst had died on the day of the gig. Bert played on most of the band’s albums in the 70s, so I can only imagine how tough that news was for the band to hear about such an old friend. It was a somber track for a somber moment of the evening, and the more I’m faced with my own mortality, the more dedications like these move me. I’m not crying, you’re crying.

To finish off with, Focus played the big boy song – ‘Hocus Pocus’.  Thijs continued his yodelling streak, flute solos, and we were also granted a 10 (yes 10!) minute drum solo from Pierre. I was genuinely astonished he didn’t have a heart attack. At 76 years of age – he absolutely blew the roof off with his playing. Packed full of energy, creative rhythms, and sweat flying across the first few rows of the audience – this was something I wasn’t expecting to see this evening. Genuinely, maybe one of the greatest drum solos I’ve ever seen live – and I was stood right at the front of the venue to take it all in.

10 whole minutes of Pierre slaying behind the kit

With the band introductions done, thanks to the sound engineer, and merch desk, the band slid in another round of ‘Hocus Pocus’ before a cheeky encore.

I’m so glad I get to see these prog legends once more at the Prognosis festival in the Netherlands next month. Some of these classic bands aren’t going to be around much longer, so if you get the opportunity to see Focus live, make sure to take it. You certainly won’t regret your decision to see these legends!

A flamboyant flute solo from Thijs