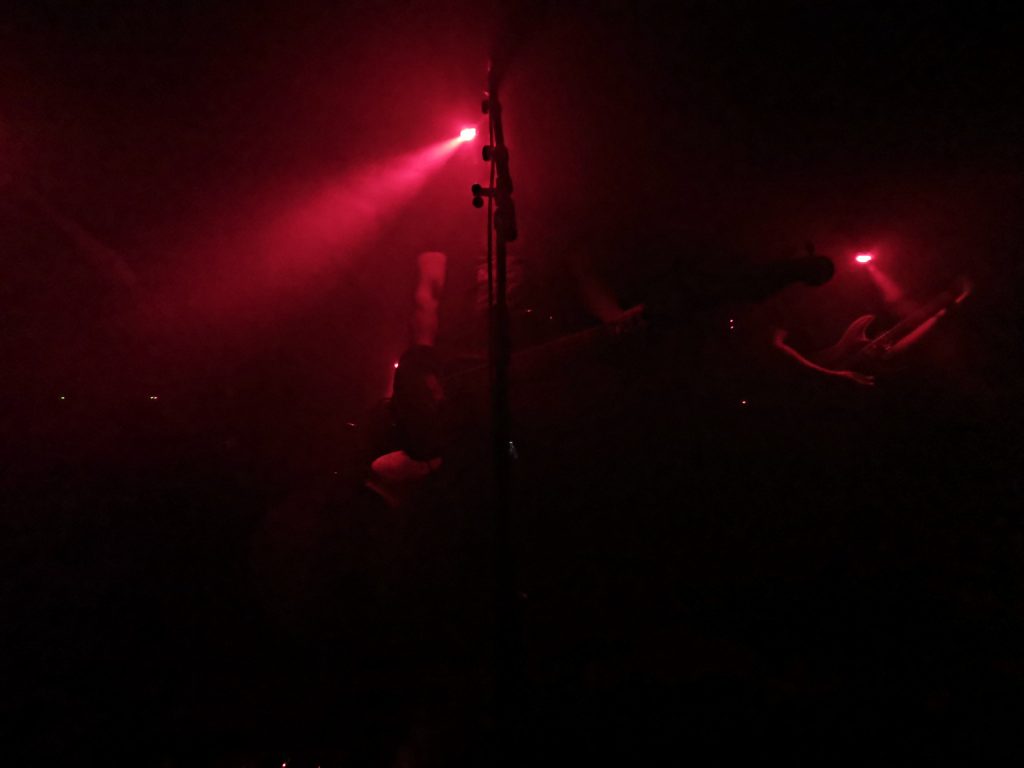 Imagine the following situation: you’re an avid concert-goer, you breathe music, and you spent two years waiting for the next show because of a little virus ruining the fun. And then, suddenly, you hear the news: “Shows are happening again!” Your brain doesn’t know how to process this just yet, but you manage to go to your local ticket retailer and see what’s in stock.

Celeste, that’s what is in stock. I couldn’t believe the odds; I have only very recently written a review of their latest album. If this isn’t a sign from the heavens, I don’t know what is.

So, my first concert in over two years (my last one was Sabaton of all things), these French metalheads are the ones to finally open the door to live entertainment for me again. With that in mind, let me preface this by saying that what you’re about to read is heavily biased, as I was already full of adrenaline just by being at a concert again after all this time.

So let’s begin the retelling…

It was a gloomy day, weather-wise. Completely overcast, light rain. Which is not unusual for Hamburg at all, so I guess the weather was normal. It certainly set the atmosphere for the storm to come, though. And what a storm it was!

The show starts at 8 o’clock sharp with the opener, Conjurer. While I haven’t really heard from them so much, the few songs I’ve binged beforehand to set my expectations sounded very promising. And they delivered! The crowd were slow at the start of their set – possibly because I was by far not the only one who had forgotten what live music sounded like – but by the end, the whole room was on fire. Ears were ringing, throats were hoarse, and we weren’t even at the main dish yet.

After about thirty minutes of setup, it was time for Celeste to hit the stage. I took the in-between time to work my way to the front; after two years of abstinence, I wanted to have the best spot possible. It wasn’t easy, but I made it just in time to be at the dead center of the front row – dare I say, jackpot!

Then the fog machines hit up again. Although this time, Celeste decided to dump into the room what little Conjurer had sprayed during their entire 45-minute set. The air was so thick from the fog machines that you could cut it with a knife, and it was nearly impossible to see anything.

That, however, is the whole point. Celeste’s shows are insanely dark, and this was possibly the darkest concert I’ve ever been to. The only illumination was provided by very dark stage lights, shining in a constant crimson. The band members themselves accompanied this by wearing red headlamps; I presume the type that professional cyclists wear at the back of their heads. These headlamps pierced through the fog like a distant, creepy searchlight.

And that was it, that was the entire light setup.

Oh, uh, except of course for the strobe light. The constant, unrelenting, strobe light. Oh my God, there was so much strobe light. If you were epileptic in any way, even slightly, this concert was not for you. It was intense – and I haven’t even talked about the music yet.

It’s hard for me to describe exactly what I heard there. Perhaps the best summary is: one hour of nonstop energy. And when I say nonstop, I mean that literally. Every single song is a demanding task to get through, as hammering drums, two riff-laden guitars, a bass, and vocals from the depth of hell pierce their way into your ears.

Allow me to describe what I experienced with a graph: 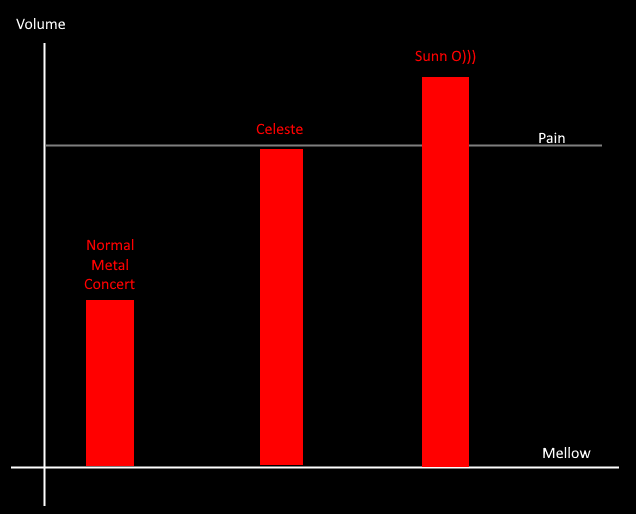 A very scientific graph of how loud Celeste is

So, as you can see, it was not the loudest thing in the world, but it just managed to stay right below the pain threshold. With earplugs, however, gotta mention that. Go naked ears and you will leave the concert with tinnitus.

Let’s talk about the setlist. They’ve mostly played the entirety of their new album ‘Assassine(s)’, although in a mixed-up order. The concert started with ‘(A)’, an instrumental that also contains two minutes of ambiance. What we didn’t yet know is that these two minutes will be the last, brief moments of calmness for the next hour. The song reaches its halfway point, as the musicians turn on their headlamps one by one, beautifully synchronized with their individual first chords of the evening.

This story continues throughout the set to come, with the only moments to catch a break being an ominous drone to connect each song. No break lasts longer than twenty seconds, though, so don’t expect to be sweat-free before the clock on the wall tells you to go home.

With every song, I lost myself into a world of ecstatic bliss, which made the concept of time meaningless. I couldn’t have told you, at any point, whether we were on song three or song nine; the whole concert blended together into one seamless experience. It was like a constant waterfall of brutality onto your entire body – no breaks, no halves, no chapters. It just started and went on.

After a short fake encore break, the band hit the stage one last time to finish the concert off with their previous album’s opener, ‘Cette chute brutale’. I didn’t care anymore. At around two minutes, when the title drop occurred, I screamed my lungs out. I don’t understand French, I don’t know anything about what Celeste sings about, but they manage to break any language barriers, and I chimed in with what little energy I had left at that late point.

One last chord, and the show was over. I would’ve cheered, but I was for all intents and purposes clinically dead at that point. I managed to grab my jacket and go home immediately; my usual post-concert beer had to be canceled.

A little trivia: I read Celeste’s (German) Wikipedia page a few days ago to prepare myself for the concert, and was surprised and a little disappointed that it mentioned their concerts being comparatively short. This was explained by their intensity being too heavy if it was extended too much. As I stood there listening, however, I realized that this was not something to pity, but much rather something to appreciate.

Trust me, one hour of Celeste is more intense than three hours of any other band. You’ll leave the concert hall shaking, numb, and coughing from all the fog. Your ears will ring despite wearing earplugs, your eyes will burn from the strobe light, and your whole body feels like you just had the most violent massage of your life.

Would I recommend seeing Celeste live for yourself? Well, that depends on how much your body can take. I’d say it’s definitely worth the experience if you’re looking for a demanding show.

For me, however, I can easily summarize it like this: 10/10, would partake in a near-death musical experience again.