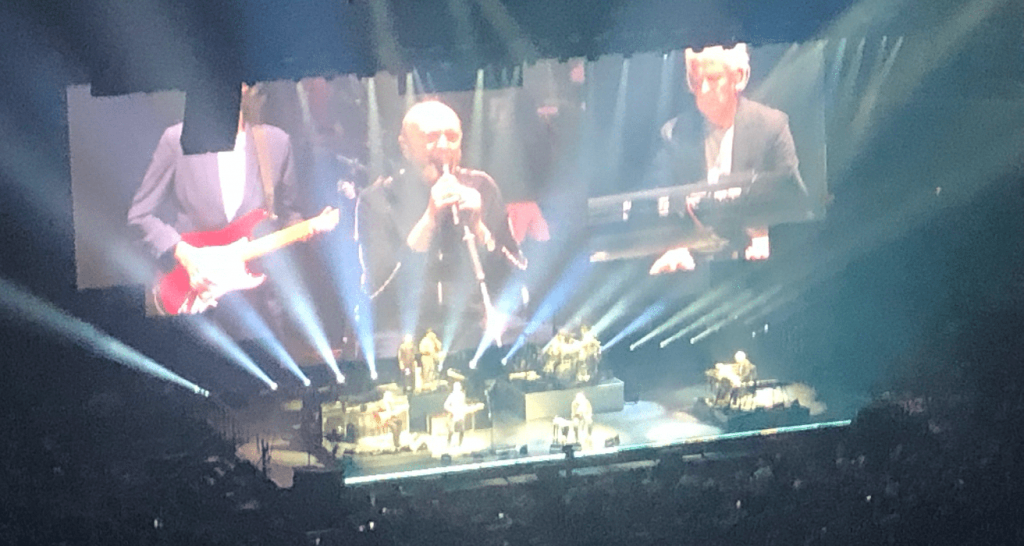 Tony Banks, Phil Collins, and Mike Rutherford, the ‘…And Then There Were Three…’ crew of Genesis, have come together for one more tour culminating an over 50-year journey of music. They are calling this final tour ‘The Last Domino?’, a reference to their song titled Domino which I’ll talk about more later as it was in the set. After opening the tour in September with performances in The UK the North American leg of the tour kicked off Monday night with two performances at The United Center in Chicago, Illinois. I was able to attend the second of those shows at The United Center on November 16th.

The show began with a performance of ‘Behind The Lines’. The stage was set up with Phil Collins at the front and centre stage sitting on a stool to perform the vocals as physical issues at age 70 have kept him from standing for long periods of time, as well as playing the drums. To Collins’ left was Tony Banks and his multi keyboard setup. Mike Rutherford stood stage right with his guitar and bass rig setup. Joining the three on tour were Nic Collins (Phil’s son) on drums with his drum setup right behind Phil, and Daryl Stuermer them playing guitar and bass and his setup was to the right of Rutherford. The band also included two background singers and multi-instrumentalists in Daniel Pearce and Patrick Smyth.

From the start, the band were tight showing no rust from the brief month pause between the UK shows and the North American leg. Collins vocals displayed a sharp-edged timbre to them as with age he’s lost some of those lower overtones in his voice that allowed the smooth vocal delivery that we have all come accustomed to. Regardless, when listening you still knew it was Phil.  ‘Behind The Lines’ quickly transitioned to ‘Duke’s End’ and then into ‘Turn It On Again’.

Some of the first memorable visual effects from the concert came during the song ‘Mama’ which followed ‘Turn It On Again’. The stage lighting and visual effects took on a red glow for ‘Mama’ in what I’d describe as being inside a 1970s lava lamp. Despite the harsher tone in Collins’ voice, he did nail the iconic laugh that occurs throughout ‘Mama’. Banks’ organ entrance in the song was also very powerful in this performance and it gave me goosebumps. ‘Mama’ was never one of my favourite Genesis tracks however following this powerful performance of it I may have to take some more listens.

‘Land Of Confusion’ was next in the set, and it featured a new video accompanying the performance of it that depicted what looked like Mary Poppins era British bankers marching outside different houses of congress whilst it rained down rolls of toilet paper. And…yes, the nightmare-inducing puppets of Banks, Collins, and Rutherford from the original music video of MTV fame also did make a brief appearance too. 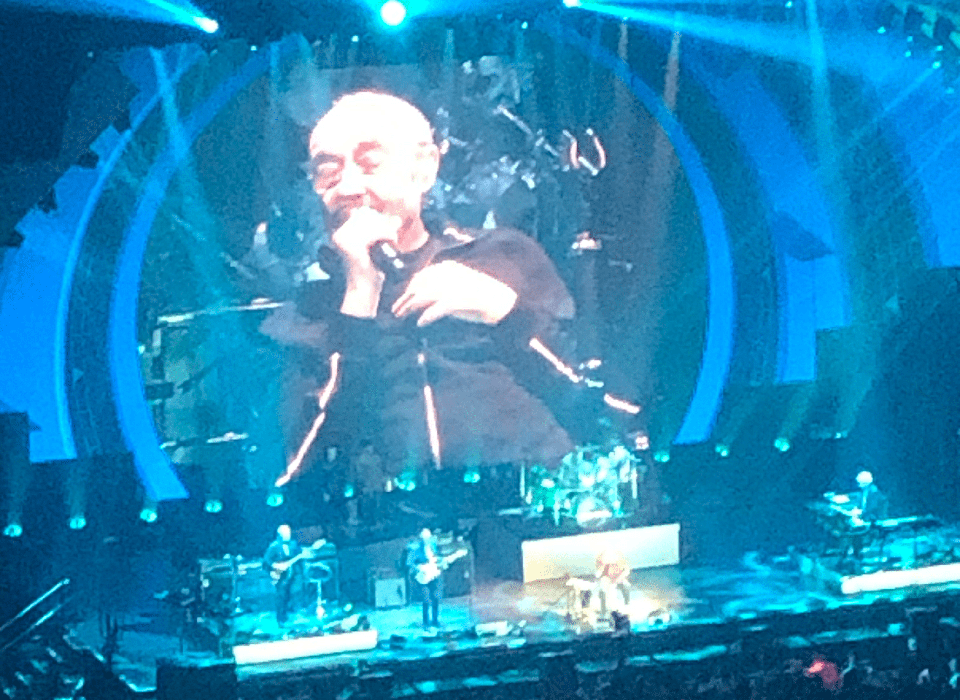 Following ‘Land Of Confusion’, Phil led the audience in the first of what he referred to as “Genesis’ party tricks”. This party-trick began with Phil telling the story of the next song ‘Home By The Sea’…

“The next song is about a haunted house on a hill by the sea and it has nasty things living in the walls, and living in the ceiling. It is our job to get them out.”

Phil then had the audience join him in putting their hands in the air like jazz hands and yelling “wooOOOoo” like a ghost. The first of the audience’s contributions weren’t spirited enough for Phil. He continued…

“I see there are non believers here so we’re going to have to do it one more time.”

After a second much more spirited jazz handed spooky woo from the audience, ‘Home By The Sea’ then began. The instrumental section at the end of ‘Home By The Sea’ that also precludes ‘Second Home By The Sea’ really stuck out as a great moment of the night with Banks and Rutherford trading solos back and forth, whilst Nic Collins was providing the memorable driving drums during that segment. One other observation I had during ‘Home By The Sea’ is that there was a ghost that was featured in the visual effects playing behind the performance. To me, the ghost resembled a young Peter Gabriel, the bands original lead vocalist who is still very much alive, with its balding in the middle but long flowing on the sides hair. In conversing with other concertgoers around me it appears I was the only one that saw that likeness.

‘Fading Lights’ was next in the set and this was the first song that Rutherford broke out his signature double-neck guitar/ bass. ‘Fading Lights’ featured only the main three of Phil Collins, Banks, and Rutherford on stage. It also included some eye-catching 3D visual effects of spinning prisms reflecting all sorts of light and colours. The rest of the band joined them back on stage at Fading Lights conclusion and quickly transitioned into the fast driving section of ‘The Cinema Show’.

The next portion of the concert took place at the front of the stage where the entire band joined together in a more intimate semi-acoustic setting. The first song with this setup was ‘That’s All’ and it pretty much maintained its original sound except for an acoustic guitar solo performed by Stuermer. ‘The Lamb Lies Down On Broadway’ followed in this setting and it was quite the unique arrangement. It sounded as if 1980s Genesis had made the song into a ballad compared to the showtune-y nature of the original 1974 version. The last song in this condensed setting was ‘Follow You Follow Me’ – and this one did have the straight-up acoustic cover vibe to it that would have been suitable for VH1’s Unplugged back in the day. Banks synth solo from the original was now performed on piano in this setting and it was quite pleasant! 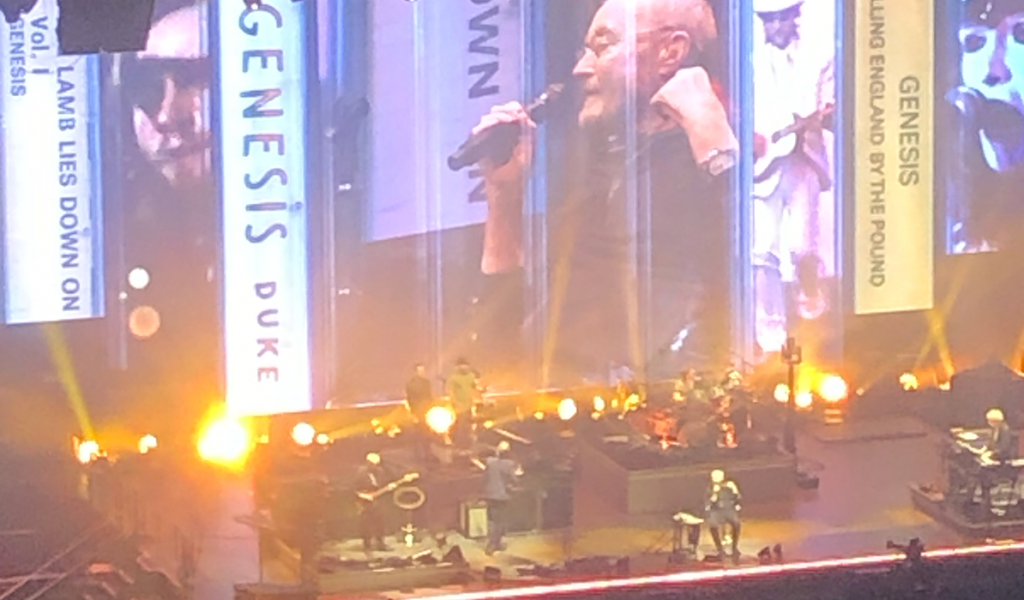 The band then returned to their original spots on stage and back to the standard format. ‘No Son Of Mine’ came up next, and was definitely Phil’s strongest and passionate performance of the evening. Enhancing this performance were the visual effects of mechanical clockwork moving all directions around live shots of the band.

Next up came the song ‘Misunderstanding’ which was a surprise set addition for the North American leg of the tour that had kicked off the previous evening. This was a surprise because its last full performance by the band was back in 1984. I’m baffled as to why it hasn’t been performed since 84 because it was a great live performance. Lots of crowd activity in this one as everybody around me were singing along to the recurring woos in the chorus.

I started noticing a pattern at this point of a nice mix of instrumental segments and vocal segments as the next song was the instrumental portion of ‘Firth of Fifth’. In this section, it was Stuermer’s task to take on the iconic guitar solo that was originally performed by former Genesis lead guitarist Steve Hackett. Stuermer did not disappoint as he began the solo in more of a shredding fast fingerstyle format before returning to the melodic hook as originally performed by Hackett. I also want to point out that Rutherford’s bass was really singing through the solo as well offering a counter-melody driven bass line at the outset of the solo.

‘Firth of Fifth’ then transitioned to the talking portion preceding the chorus of ‘I Know What I Like (In Your Wardrobe)’. Following the chorus, Phil did some brief scat vocals before pulling out a tambourine which he played with his head in what was for sure a nod to Gabriel and his original dramatic performances of the song. Stuermer again got to show off his shred heavy soloing chops with another flashy guitar solo.

Phil then led the second of the evening’s Genesis’ party tricks by getting the audience to portray falling dominos by having different sections of the arena react at specific times as spotlights were shined on them. While this was happening Phil talked about how we all directly affect each other in this world. This was an uplifting message and fun party trick as it also led to the performance of ‘Domino’ which was quite the ride as it included visual effects of buildings built from Jenga pieces and various bright and fast-moving strobe lights to the constant changes in the music.

‘Throwing It All Away’ was performed next and it was noticeably tuned down compared to its original version. I’m sure there were other songs tuned down for ease of vocals throughout the evening but this was the most noticeable of them. The visuals during its performance included footage of the band from all of their eras since their inception in the late 1960s fit between cassette tapes of their albums and VHS tapes marked with live performances through the years. It was a very retrospective moment for this final tour.

The main set finished with performances of crowd-pleasers, ‘Tonight Tonight Tonight’ and ‘Invisible Touch’ their top streamed song of all time. After leaving the stage briefly to rowdy applause the band returned for two encores. The first encore was ‘I Can’t Dance’. The crunch from Rutherford’s guitar’s opening chords hit you right in the face, whilst in the background, you saw strutting multi-coloured silhouettes of the band from the songs music video.

We were then teased with the opening portion of ‘Dancing With The Moonlit Knight’. This would be the ultimate feat from the band to pull off a full performance of it but alas it was just a tease of the intro and it then transitioned to ‘Carpet Crawlers’ which is my personal favourite Genesis song. Despite it being my favourite, I had never pictured it as a show closer but this passionate performance proved me wrong and was a fitting close to the concert.

The evening was now complete and despite getting up there in age Genesis put on an incredible concert with powerful music, visual effects, and fun anecdotes! If I could have asked for anything else to be included in the set I would have recommended anything from ‘A Trick Of The Tail’ as none of its songs made it in the set and it is my favourite Genesis album as a whole from start to finish.

With the surprise addition of ‘Misunderstanding’ for this leg of the tour, it is still quite possible more songs could be added so I’ll stay tuned watching all forthcoming setlists. 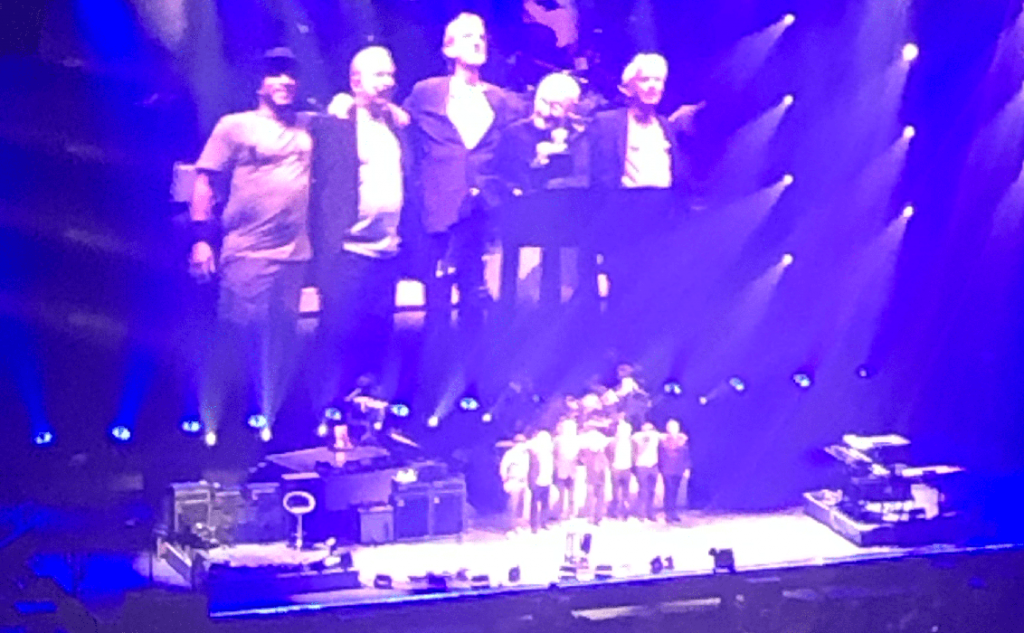