The release was confirmed on twitter by their label Inside Out Music, Sons of Apollo are set to release their second studio album on January 17th next year!

For those that don’t know, Sons of Apollo (SOA) is a supergroup that formed in 2017 featuring Jeff Scott Soto, Bumblefoot, Billy Sheehan, Derek Sherinian, and Mike Portnoy. They released their debut album that year, and went on an extensive tour to show off their talents. I was lucky enough to catch them twice, once at Be Prog! My Friend in Barcelona, and once in London. 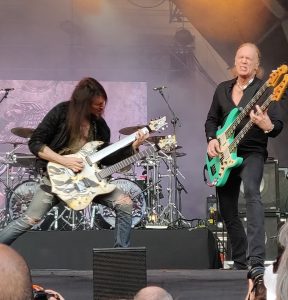 Bumblefoot and Sheehan playing at Be Prog! My Friend, 2017

Since the last tour, Bumblefoot filled in for the late John Wetton in Asia for Yes’ ‘The Royal Affair’ tour across America. Portnoy has been on tour and recorded albums with Metal Allegiance, The Neal Morse Band, and Flying Colors. Soto has been on a tour with his solo band, Sheehan has been on tour with The Winery Dogs… These guys just don’t stop!

Their official twitter account put out a teaser yesterday with a sneak preview which could potentially be a sneak peak for one of the new tracks. Plenty of fretless guitar and frequent time signature changes can be heard which lets you know it’s a SOA record.

Earlier this year they put out a live album with orchestra recorded in Plovdiv, Bulgaria. It’s not the first time the orchestra has worked with Inside Out either as Devin Townsend also has a live album out with the same orchestra.

I have no idea how these musicians manage to do so much music with their time. But I’m incredibly thankful that they do. You can expect to hear tracks off the new album in their North American tour next year.