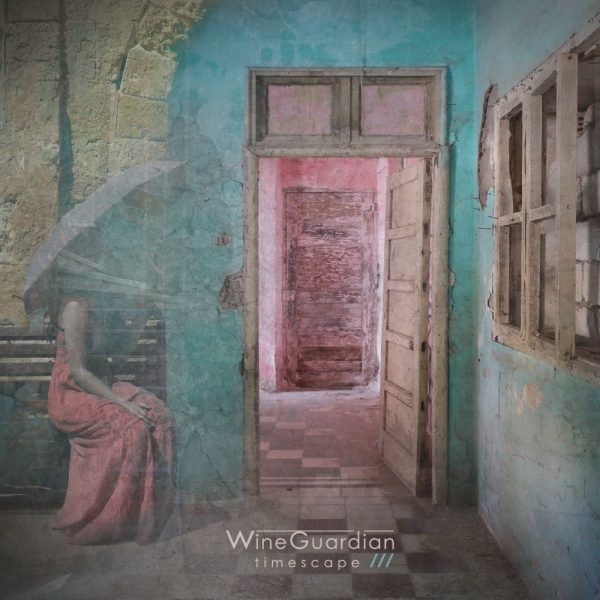 ‘Timescape’ is the title of the recent album from the Italian three-man band, Wine Guardian. Since forming in 2008, the trio have released one other album and an EP. Wine Guardian are a band that wears their influences on their sleeves, but they pull from such a wide variety of prog and classic rock music that the end result is a fairly unique album with much to offer.

Before I say anything about the music, I feel it’s worth noting the lovely cover art for this album. It has a worn-down rustic look that, combined with the colours and band name, conjure mental images of a far away vineyard. Anytime cover art gets your imagination working before the music has even begun, then it has done its job.

The album kicks off with the chugging riffs on the track, ‘Chemical Indulgence.’ Shortly after, is the introduction to vocals that are immediately reminiscent of Geddy Lee from Rush. The song progresses through an anthemic chorus and a quieter section, expertly using small doses of harsh vocals to punctuate where necessary. And sharp production raises the quality of every song on the album, especially the guitars which sound crystal clear.

‘Chemical Indulgence’ flows nicely into the second track, and my favourite on the record, ‘Little Boy.’ The opening riff sounds like something straight off of Blackwater Park or In Absentia. It’s heavy, and it’s memorable. But one minute in, the song changes course, and takes on the sound of a 70s prog rock ballad. This balance between modern and classic prog is what gives ‘Timescape’ an interesting sound that carries throughout its runtime.

‘Magus’ starts off with a catchy acoustic tune before exploding into another head-banging riff. It’s the only instrumental track on the record, and it’s shorter than most of the other songs which hover around the seven to nine minute range. Tight guitar solos and solid bass lines make this another standout on the record.

Though Wine Guardian blends different styles of modern and classic prog, some songs do so more than others. ‘Digital Dharma’ leans in favour of the classics. The first two minutes are all acoustic, with some funky bass mixed in. When the song transitions to metal, parallels can be drawn to bands such as Queensrÿche and Fates Warning. These influences, occasionally, can be too on the nose. But I think more often than not, they’re done tastefully.

As we move into the final few songs, Wine Guardian maintains the high quality of song-writing they displayed earlier. The excellent bass playing continues in the intro of ‘The Luminous Whale’, and the instrument features more prominently here than in any other on the album. This is also the best vocal performance on the record. Lorenzo Parigi impresses with some of his highest notes one minute, before plummeting into harsh vocals the next.

‘The Astounding Journey’ is the aptly named track that lasts just over twelve minutes, making it the longest on the album. Right away, it introduces an eerie sounding riff that’ll return later. The song picks up steam and peppers in some catchy and easy to sing along to vocal melodies that are present throughout ‘Timescape.’ When that eerie riff returns midway through the song, it’s one of my favourite moments on the record, despite its simplicity. It gives off such a trippy and dark feeling that I’ve not seen replicated often. From that point on, the song is instrumental, and a fade-out brings it to a close.

Though ‘The Astounding Journey,’ acts as the true finale, there is a bonus track that’s worth mentioning. ‘1935’ is a serene ending to an album that was always on the move. It’s an all-acoustic track carried mostly by Parigi’s voice. While it’s different from anything else on the album, it caps the experience well, and more than any other track, it ties back into the rustic vibe put forward by the cover art.

‘Timescape’ is a solid effort from a band that could very well be in the early stages of their career. While it’s a little rough around the edges, Wine Guardian already exhibits high-level musicianship and song-writing ability. This album slipped under the radar of many, but is absolutely worth checking out for fans of the genre.